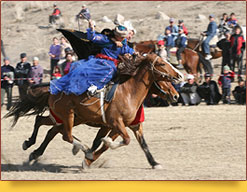 This festival includes national games Kyz Kuumai, Tyiyn Engmei and Er Oodarysh. These games are horse games which have always been popular and played in every important event, or festivals. Also at this day you will listen to folklore show and taste Kyrgyz cuisine.

Kyz Kuumai is literally translated as “Chasing the Girl”. This is to show the talent of riding a horse for both man and woman (surprisingly though it might be but a Kyrgyz woman has always been a good horse rider). On a certain distance a man on a full gallop starts to chase after a woman and tries to reach and win a kiss from her. A woman tries her best to escape from him for she can reach the finish line and turn back and start chasing after a man in order to whip him all the way back. Even though the women could be good horse riders, men always have to be superior and not to be able to reach a woman was considered a big shame which has to be paid off with being whipped. It is said that in former times this game was played by the young couples being in love with each other, so a smart girl who was on the way to winning was supposed to slow down so that not to shame her beloved in front of the people. This show is very interesting to see.

Tyiyn Engmei is another horse game but played by men only for them to show their skills on horseback riding. Tyiyn Engmei means “Grab the Coin”. So there are few coins laid on the ground and a young man has to grab them while galloping on a horse in a full speed. This game was played a lot in former times in order to train their skills on horseback riding which was one of the most important skills used during the battles. This game taught the young how to be solid on a horse keeping good balance and develop flexibility.

For the same reasons the other game was played which bears the name Er-Enish, or called otherwise Oodarsyh. Two tough and strong men on horses wrestle. They wear no shirts and cover their bodies with oil which makes it more difficult to pull down the opponent from horse. The rules do not allow them to punch on face, kick, bite, and whip. Technically they just have to use their bare hands for pulling each other down. The participants can show not only their strength but also skillful management of horses. 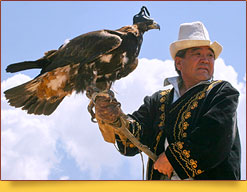 Besides testing traditional cuisine, performing national folklore and handicraft and souvenir’s sale, you will be able to see the fascinating show of nomadic way of hunting. This hunting is executed with the help of eagles and taigans, special group of the only dogs who can hunt on wolves tamed by the Kyrgyz people from the ancient times. Kyrgyz hunters trained eagles and passed this tradition from generation to generation. With the help of eagles and taigans they hunted on wolves, foxes, marmots, badgers, hares and other animals and used their skin for trade as a means of their sustenance. Hunters normally can keep eagles from their baby age to five-ten years. At the beginning they are trained for a special mask to cover their eyes, they get used to the voice of the master. After two months or so hunters use a special technique for teaching them to follow the skin of animals that is tied to a fresh meat. This is how they learn to get an award for their action and acquire first habits of a hunter. In this fascinating show you will see how the Kyrgyz hunters hunt on animals using their eagles and loyal dogs.

Felt and handicraft show performed by the local masters will allow you not only to learn about the felt products and the way of their manufacturing but also will give you an opportunity to participate in these procedures. Kyrgyz women have always been skillful in creating masterpieces of art represented in their handicraft work. It is their pride and responsibility to prepare a dowry for their daughters which has been preserved as part of their tradition for many centuries. Normal felt carpets of 3 meters to 2 meters size can be completed with the help of 5-6 women for 2 months working all day long. 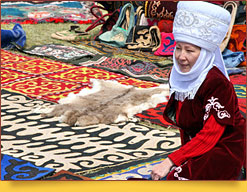 You can estimate not only their labor, extraordinary zeal and patience but also a talent of creating a real work of art. As a continuation of this you can witness the other talents of local people as they will present you the best folklore songs, dances, melodies played on traditional musical instruments like komuz (3-stringed musical instrument made of an apricot tree), ooz komuz (a tiny iron instrument played by drilling it across your teeth and mouth), chopo choor (an instrument made of clay), traditional flute, shyldyrak (jingles) and many others. Also you will be able to see the reciting of legendary Manas story by the special singers named Manschi. The story of Manas is the world’s biggest epic exceeding with its half million lines such world known epic stories as “Iliad” and “Odyssey”. It is considered to be the encyclopedia of Kyrgyz history, traditions and culture and the main national pride which verbally has been preserved for thousand years from generation to generation.

We highly recommend you to participate in this festival for you will be able to plunge into real nomadic traditions and customs carefully preserved even nowadays.