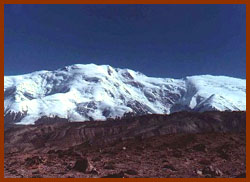 In 1890 Francis Younghusband accompanied with George Macartney lead his successful mission on an establishment of official British presence at Kashgar which was again under the control of China. Having followed Elias"s traces to the bank of Karakyol lake, he described Kongur Tobe and Muztagh-Ata, as "the huge mountain massifs towering above the Roof of the World with Russia, India and China at the bases".
In 1894 Sven Gedin lived about one year in area of Karakyol lake. During free from researching time he made the first attempts of ascents in the area. In spite that he practically had no experience, however, he tried four attempts to summit Muztagh-Ata. First two ones he went via the most northern of 2 western ridges (Yak-Bulak glacier), leading to the northern, lower Muztagh-Ata"s summit. The altitude that he reached he estimated as 6300 m (20670 ft). Then he tried to ascend via the ridge leading to main summit, but climbed only up to 5640 m (18540 ft). His last attempt via the other northern ridge (Chal-tumak glacier) he started on August, 16. However the next day because of a strong wind he had to turn back, and on October, 4 finally descended to Karakyol lake. Though Gedin had to know, that the name of the mountain already appeared on Russian maps, subsequently he repeatedly asserted, what exactly he named the mountain as Muztagh-Ata. He measured its altitude and repeated Trotter"s measurements of the altitude of Kongur Tobe -7800 m. The highest altitude of the area mountain Kongur remained unnoticed.
In 1899 Derby made out the northern face of Kongur and estimated the mountain in 23250 ft (approximately 7090 m).
In July 1900 Sir Aurel Stein, a well-known archeologist and researcher of the Central Asia, brought from Karakyol lake some excellent photos on which significant details of Kongur massif were visible. In result he began the first who identified Kongur from the southwest and distinguished it from Kongur Tobe. Just as Gedin, Stein also tried to summit Muztagh-Ata on the most northern of two western ridges, for all that he used yaks carrying his gear up to higher altitude. He had to turn back from 20000 ft (approximately 6100 m). Two his porters from Khunza tribe reached 21500 ft (approximately 6550 m) and found out, that an abrupt dump blocked their way. Four years later Bogdanovich also made unsuccessful attempt.
Exact positions of the massif"s summits were determined only in the twentieth years. Then S.P. Scrine, subsequently Sir Clarmont, took supervisions of the area from survey points in area of mountains Shivakte and Tigarman located to the east from Kongur. Scrine approached to these mountain groups, that represented a mash of "low" 20000-21000 ft (6000-6400 m) peaks, from the part of the river Karatash. He took photos of the top 130 m0-site of the east ridge of Kongur and photographed the mountains to the southeast. Having compared the new data with Stein"s conclusions he determined sites and altitudes of Kongur Tobe (Kongur-I, in accordance with Scrine"s name) and Kongur (Kongur-II).
Mountains of Kashgar gradually became more accessible. In days of political cataclysms in 30th-s and 40th-s years the massif was crossed by some Europeans. Among them was Eric Teichman who became the first person who drove from Peking to Kashgar. Then he went astride from Kashgar to India. He photographed Kongur Tobe and Kongur from Karakyol lake.