1. History of development of the area up to the end of 19-th century 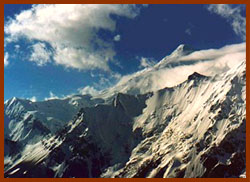 East borderland of Pamirskoe upland is edged with a chain of high mountain ranges.
They tower by a huge wall above oases of Kashgar and Takla Makan desert. This mountain chain begins from the east borderland of Zaalaisky range and, turning southeast, passes in King-Tau range with its highest mountain Chakragil 6670 (on some maps it is named Karabektertag). King-Tau mountains are separated from extended to the south meridian Kashgar range by the river Gezdaria valley. Tashkurgandaria river head separates Kashgar range on the east from Tashkurgan and Chon-Kyr ridges, which continue this mountain chain up to its merging with Western Kun-Lun.
Thus, the highest altitudes of Kashgar, the mountains Muztagh-Ata (7546) and Kongur (7719), lay on crossing of many ranges axial lines. Different researchers consider them either the area of East Pamir or Western Kun-Lun.
The range has significant glaciation (about 2258 km2). There are some tens glaciers on Kongur, a few the largest of them reach 15 km in extent. 16 glaciers go down from the ice dome of Muztagh-Ata. Koksel is the largest of them in extent of about 21 km.
The foots of the ranges in the west and southwest are located at altitudes of 3800-4000 m, the slopes have rather gentle outlines though they are rather abrupt. Glacier"s tongues are located at about 4500m. To the east and northeast Kongur and Muztagh-Ata massifs present more than three-kilometer ice-covered rocky mountain scarp. The highland that is rather seldom visited because of its full absence of roads is located there. The valleys have deeper downcutting, than in the west, the rivers flow in canyons in places and some glacier tongues go down up to 3000-3200 m. On northern slopes of the ranges fir, archa and tien-shan fur-tree woods have been saved here and there. The basic population of Kashgar mountains is Kirghiz. On the southern slopes of Tashkurgan area Badakhanians (sarygoltsy) live. 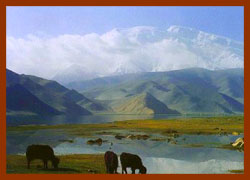 These territories are manned since the most ancient times, and mountains of Kashgaria are located near to historical caravan ways. The most ancient population of the territory was Indo-Europeans (Indo-Iranians). Materials of excavations show that aborigines supported close contacts to tribes and locals of Central Asia, India, Southern Siberia and Mongolia and only in an insignificant degree with Tibet and China.
The Chinese took Xinjiang under the constant control only in 10th years of the 20-th century though the first Chinese invasion of it was in 138 BC. One, from the most dramatic military companies, happened in 747 AD, when the Chinese armed groups, having occupied Kashgar and Pamir, forced the Tibetans, which completely supervised the western territories that time. Then, practically during 1000 years, the area got out of control of China. Only in 1758 Manchurian commander Tsjanlun conquered Dzungaria and East Turkestan.
Within 4-th and 7-th century Chinese Buddhist monks repeatedly crossed the area on their way to India. Travelling notes written by Fa Xian (399) and Xuan Zang (624) have reached us. Both of them passed Chikchiklik pass to the southeast from Muztagh-Ata on the way from Takla Makan desert to the boundary area of Tashkurgan.
In the second half of 13-th century Marko Polo crossed Pamir from the west to the east.
In 1603 Benedict de Goes, Portuguese jesuit - missionary, visited the area on his way from India to China. There is no more the information about later visitings the area by Europeans within 200 years. It is quite probable, that in 1820-th years an American traveller Alexander Gardiner was here. The real development of the area began with the starting of “The Big Game” between Russia and Britain.
From 1820-s till 1880-s researching of Pamir, Kun-Lun, Kongur and Muztagh-Ata mountain massifs, turned out in the Russian - British interests crossing and in many respects had a political character. Researchers solved, first of all, three main tasks: mapping of all watersheds, in particular definition of the basic source of the Amu-Daria river (Oksus); reconnaissance of strategic passes; adjustment and development of trading and political communications with local population. In the literature it is possible to find the most interesting descriptions of remarkable intrigues of that period. Despite of the political underlying reason, the majority of travelling Europeans felt like not only scouts, but also pathbreakers. As John Keay noticed (in his book “Gilgit game”, some of them undertook performance of political tasks first of all because of opening opportunity to travel a lot. 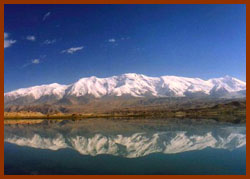 In February, 1838 “The Roof of the World” was visited by the first British - lieutenant John Wood. He was one of the first Europeans confirmed the truth of Marko Polo"s descriptions. However his pamir travelling passed far to the southwest from the massifs of Kongur and Muztagh-Ata. After Wood within 30 years there were no Europeans there, that could be explained negative altitude to them after the British-Afghani war in 1840 years. Trying to penetrate into Kashgaria in 1857 a scientist A.Shlaginveit was beheaded under the order of local governor Valikhan-tyurey. Only in 1868 Hayward, having passed suburb of Takla Makan desert in a direction of Kashgar, noticed and plotted “the big peak” to the south from Kashgar. Since 1873 the presence of British began more regular in the area. During this period Xinjiang left from under the control of China again due to dungan and Jakub-Beck (1867-1878) rebellions. The organised British mission in Kashgar at that time, making at T.D.Forsyth, 350 person, was certainly the biggest, which Xinjiang had ever seen. Members of this mission put on the map huge mountains to the south from Kashgar. One of the area researchers -Trotter - calculated Kongur altitude as 25000 ft (7620 m). Then Trotter and his partner Gordon with two other British passed to the south to Tash-Kurgan through Chikchiklik pass. The basic purpose of the British mission was a political and military support of separative moods of Jakub-Beck using the last as an argument in negotiations with Russia. In 1869 and 1870 two locals - pandits, working on Britain, also crossed the area.
Intensive Russian researches of Pamir began since 1860-s. In 1876 expedition led by general Skobelev arrived to Pamirskoe uplands. L.F.Kostenko observed Muztagh-Ata from Uzbel pass, the area of Karakyol lake. In his notes for the first time the name of the mountain appeared. Next year Muztagh-Ata was observed from the more southern points achieved by the expedition led by A.N.Severtsov. In 1883 Muztagh-Ata mountain massif was explored by a mountain engineer D.L.Ivanov - a member of the expedition led by captain Putyata. 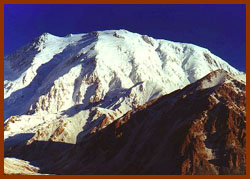 In 1885 one of the greatest researchers of the 19-th century - Ney Elias without accompanying by Europeans crossed snow-covered Karatash pass from the side of Takla Makan and passed between Muztagh-Ata and Kongur. He appeared the first European who reached Karakyol lake. On his map added with explorations made by Hayward and Trotter, Muztagh-Ata was missed, however, he understood, what it was, probably, the mountain that Kostenko had noticed earlier. Hayward named peak 7620 the Tagarma mountain because he heard the stories of locals about that in this direction a valley of the river Big Tagarma - a large inflow of Yarkand - Daria - was located. This name Ney Elias transferred on Muztagh-Ata and, passionately wishing to embody the British names on the map, renamed Trotter peak (7620) in Dufferin (in honour of the previous Vice-king of India). However from the sketches made by Elias at that time, it was obvious, that the Mountain Dufferin was Kongur Tobe (Kongur I), and he did not determined the real maximum point of the ridge - mountain Kongur (Kongur II). Elias plotted his own names till 1895 while the members of English-Russian Pamir commission agreed to accept local names of the mountains - Kongur and Muztagh-Ata.
The great Russian geologist and a member of the Tibetan expedition of 1889-1890 K.I.Bogdanovich gave the detailed description of geology, geomorphology and a glaciation of the massif. He crossed the area in 1889 through Karatash pass, investigated glaciers of the western slope of Muztagh-Ata (the largest of them he named as Przhevalsky glacier - nowadays it is named as Yam-Bulak glacier) and along the lake of Karakyol went to Tash-Kurgan. Then he moved through a chain of difficult passes to Yarkand - Daria river, making geological survey on his way.