The story of the Tien Shan Range 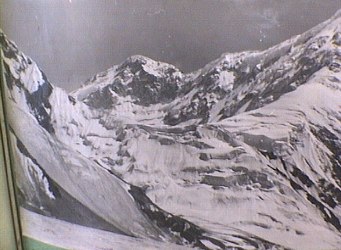 In the beginning of the 20th century, the Tien Shan Range was called Tengry-Tag, which means "Mountains of Heaven" in Turkiclan guages. Aview f of this region from the nearest summit or from the seat of a helicopter re veals only an endless sea of sharp snow-covered peaks. Aview of the area is best had from more accessible passes such as Aktog Pass on the Terskey-Ala-Too Ridge. The road through this pass runs from Lake Issyk- kul to the mountain vale of Sarydjaz through the Karkara River Gorge, covered by Tien Shan firs. It was approximately here that the Russian explorer P.Semenov (later known as Semenov of the Tien Shan due to his explorations) first saw unforgettable views of the mysterious Tien Shan. He wrote, "Straight to the south is the most majestic mountain range I have ever seen. It is covered by an unbroken shroud of eternal snow. A unique sharp snow-covered pyramid of colossal height towers in the center of the range. Here it is, Khan-Tengry..." Semenov concluded, dazzled by this unexpected view, but making a mis take that has not been corrected to this day.
Where is the mistake? Byzantine missionaries and Chinese sources let him know that the highest PointintheTien Shansis Khan-Tengry. And Semenov was sure that the majestic pyramid he had seen was Khan-Tengry. The local nomads called this summit Kan-Too, but Semenov didn"t take the opinion of his guides in to consideration. In 1895,the Swedish explorer Swen Hedin, traveling from Aksu to Kashgar, wrote, "To the North, Khan-Tengry Peak (7320m) appeared, but soon was covered by the mist of the night..."i.e., hesawyet another Khan Tengrypeak.
The vivid descriptions by Semenov and Hedin awakened an interest in Gottfried Mertzbacher, a German climber and geographer, who decided to clear up the exact location of this summit. After two expeditions in 1902-03 and 1907-08, he managed to reach the foot of the legendary peak and corn pose an exact map of theTengry-Tag ridge. The great interestin this summitand the wide spread opinion that it was the highest point of the region disallowed. Mertzbacher from noticing the neighboring peak that would turn out to be higher. Mertzbacher didn"t even notice the second peak on a photograph given to him by the Russian Geographic Society, where it was perfectly visible.
For a long time, no one under mined the authority of KhanTengry (Kan-Too), but this "enigmatic peak" was noticed by several climbers who began to give it different names. In 1943, the Tengry-Tag region was explored by Soviet military topographers, who determined that 16 kilometers to the south of Mount Khan-Tengry (6995) there was a summit that exceeded the peak by 500 meters. Soon it was established that its altitude was 7439.3 meters. The summit was named Pobeda in honor of the victory over fascism in World Warll.
It was a sensational discovery which excited a lot of mountaineers and scientists. The geographer N. Malitskiy and geographer-climber V. Ratsek supposed that the discovered peak was the original Khan-Tengry, and that the peak that had earlier been called Khan-Tengry should be called Mount Kan-Too.
In our opinion, the confusion in the historical names of the two highest summits can be explained in another way. The location of the Tengry-Tag ridge is in an area so difficult to access that it makes it impossible to see the two peaks in immediate proximity. The latitudinal location of the Kokshaal-Tau and Tengry-Tag ridges doesn"t allow one to see these two summits simultaneously from a remote spot. Thus, from Kazakhs tanand Kyrgyzstan one can see the peak with an altitude of 6995 meters, currently Mount Khan-Tengry. The peak that is cur rentlycalled Mount Pobeda (7439m) can rarely be seen from this territory. Because of its "unfavorable" configuration (it crowns a huge range and doesn"t havea prominent summit), this peak does n"t stand out among the other peaks, especially in comparison with Khan-Tengry. From the territory of modern China (as Hedin observed), the 7439-meter peak is perfectly visible, and blocks the view to the peak with an altitude of 6995 meters. A historical phenomenon probably took place, when through the age"s different nations called two different peaks by the same name Khan-Tengry (Masterof Heaven). 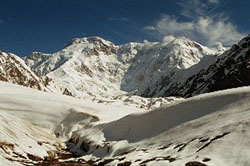 The story of the conquest of Mount Pobeda dates back to Spetember 19, 1938, when three Soviet mountaineers - A. Gutman, E.lvanov and A. Sidorenko-climbed the summit of One of the peaks with in the Pobeda range. No one is quite that they climbed to the main summit since the ascent to the peak required special skill and experience. In 1955 two teams attempted to conquer the peak. Kazakh mountaineers began their ascent from the Chon-Teren pass along the eastern ridge. Uzbek climbers started out along the northern edge from Zvezdochka glacier. Because of a sudden change in the weather, the Kazakh team decided to descend from the mountain, after having reached an altitude of 6900 meters. Nobody knows what tragedy befell them. Only one of them who had fallen in a crevasse was rescued. Thus, the tragic story of the conquest of the" enigmatic peak" began.
Only as late as 1956, a joint team of Moscow and Kazakh climbers (11 people in total) conquered the main summit, moving along the northern ridge from Zvezdochka glacier. This initiated a mass of attempts at the Tien-Shan giant. In 1958 forty-four Moscow climbers (three of whom were women) ascended to the eastern flank of Pobeda. Seven heroes continued the ascent and conquered the peak of Mount Pobeda. But soon, triumphs gave place to tragedy. The "enigmatic peak1 gained a bad reputation. But the fear and uncertainty soon changed in to a daring dream. The dream was achieved in 1967 when Chelyabinsk, Russia climbers completed a traverse of all the summits of the Pobeda ridge. There will be many more new routes, successes and losses, but these will be stories for future generations. And the peak towers gaze down at the world through the eyes of their conquerors. Standing here, you can simultaneously see the colorful Chinese Taklamakan Desert to the South and boundless peaks of snow-covered rocks in all other directions. Conquered but proud Mount Khan-Tengry greets the Master of Heaven. Day changes into night, and the inert and severe beauty changes into millions of stars and lights on Earth. And it seems that you and the grand peak become one in the heart of the Universe.