In early days of the exploratory mountaineering in the area of Khan-Tengri Peak and Pobeda Peak first Soviet expeditions faced problems that a contemporary climber might only see in his or her nightmare. In order to get to base camp (BC) site area they had to organise a whole expedition. Trucks could only rich to the town of Karakol. All further transportation had to be carried out by caravans of animals. Mountaineers would be hiring or even buying horses. And it would take caravans several days to get to the BC site. For instance, the 1936 expedition funded by the Central Council of Soviet Trade Unions and led by Y.M. Abalakov had to spend 11 days to cover the distance between Karakol and BC site at the foot of the Khan Tengri Peak. In his diary Y.Abalakov noted: “In Karakol my eyes caught the well-known figure of Letavet. They’ve been waiting here for seven days already. It’s been hard to hire horses. They are buying horses and suggest us doing the same.”
At that time customary to every today’s climber road that leads to the Inylchek village did not exist. All expeditions were caravanning along the banks of the Sary-Zhaz River using hunter’s tracks and crossing over mountain passes unknown at that time. No route descriptions and precise maps, too, were existent. Mountaineers themselves had to be explorers. 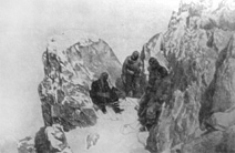 From Y.Abalakov’s diary: “We are turning right and heading into a new gorge. The pass is to be on the right-hand side. But the first shallow gully is fully locked by the barrier of snow-white peaks. My first feeling is perplexity: where do we cross over? There are either rocky crests or snowy faces around here. The serpentine ascent goes on the scree and is quite steep and treacherous. Our horses slip on the soggy snow. Suddenly one horse falls down and starts slipping away from the track. The case would turn up sorrow if not us timely helping the drover out.” They had to surmount unruly water streams and they ford their horses over.
From Y. Abalakov: “Right at the first ford, I had to have a bath – luckily, the sun kept warming us up yet…” “At a new place Lenz was first to drove his horse over the stream. The first spurt of water is most deep and rapid. The horse got half disappeared under the water and then, straight away, sprang out on the stone. The wind is sharp and cold. Not a big pleasure is queuing up at the river bank under the gusts of piercing wind and waiting for an ice-cold bath.” Most hard time they had when crossing over the Tjuz Pass.

From Y.Abalakov: ”The caravan has come. My brother Vitaliy has climbed the slope far and wide but that did not make the slope more level. In some bits we hewed the ice. The points of turning on the path were worked with particular care and obstinacy. Indeed, those turnings were the ones causing animal failures. The leading horse fell and slept down for 40-50 metres. Then the rest of the horses were given more caution. Each animal was, with whooping and urging, literally dragged uphill by five men. People and horses got tired soon and in short intervals had to stop for a breather. It started heavily snowing – as if a continuous thick white curtain was hung around – and the horses yet were slipping on the ice.”
It happened at times that expedition members having left the caravan for recognisance could not find their way back and had then to spend night in the weather without warm gear.