Yangiabad: the New History of the Forgotten Town 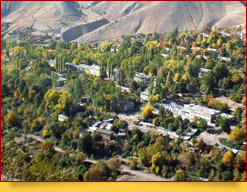 Yangiabad is quite a young town in Tashkent Province, located at a distance of 100 km from Tashkent and 10 km from the industrial city of Angren, at an altitude of 1300 m in the foothills of the Western Tien-Shan. The began to build Yangiabad (‘a new town’) in the 1940s. The area around it was rich in uranium and silver, and the best mining specialists moved to live and work in the town. It was designated a closed strategically important zone of the USSR. In the 1980s the minerals in area ran low, and the town’s population decreased considerably.

At the turn of the century the situation took a turn for the better. Yangiabad became a popular recreational zone. Today many Tashkent residents come to the town, escaping from summer heat. Among them there are a lot of hikers, mountain climbers, and lovers of various adventure sports. It is not surprising why they come: next to the town tower the picturesque mountains of the Chatkal Range; the rivers Katta-Say and Dukent-Say deliver very clear water from the glaciers, and Yangiabad itself is full of greenery. Walking along its streets, you may think you find yourself in Europe somewhere: most two-story houses were built in German architectural style by the ethnic Germans who lived there in the Soviet times. Yangiabad resembles an alpine German town, with its fantastically clear air, serenity, stunning mountain landscapes, unhurried lifestyle of the locals - which is what most residents of bustling big cities are missing. Today the town is largely populated with pensioners; most of the houses are used as dacha holiday homes by people from other Uzbekistan cities in summer.

A number of very interesting mountaineering routes start in Yangiabad. The highest peaks near the town are Babaytag (3,550 m) and Shakhtyor (approx. 3,400 m). 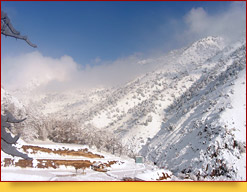 The tops of them offer stunning panoramas of the Western Tien-Shan. Yangiabad mountains are a kingdom of steep cliffs. They are of various difficulty ratings and are often used for climbing training and competitions. In winter skiers and snowboarders flock to the town. They very much like the nearby wonderful 500-meter-long ski run equipped with a ski lift.

There is a camp site up the Katta-Say River at a distance of 4 km from the town. Named after Yangiabad, it was built as far back as the 1970s. Today it is a modern comfortable holiday center for 300 guests; it has a restaurant and a bar; and they even organize dancing parties and show programs there. The center is open all year round: for hiking, mountaineering, swimming or angling in summer, enjoying the fresh most clear air of the area, and for skiing in winter.

There is a spring with mineral water near the town. The water is so good and useful that most of the guests try take some of it back home. If you walk across the Dukent-Say River valley for about 10 km, you will see an avalanche research station of Central Asian Hydrometeorological Institute based in Tashkent. It helped the miners to forecast avalanches and protect themselves in case they occurred.

Practically unheard of before, today’s Yangiabad is an actively reviving town, getting popular as a wonderful recreational destination.