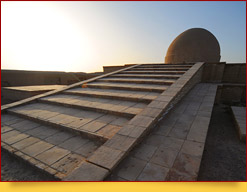 Fayaztepa is a Buddhist temple-monastic complex, found by Tashkent archeologist L.I.Albaum in 1963. It is located one kilometer away to the North-West from the site of ancient settlement of Old Termez. This historical monument was named in honour of the director of Surkhan Darya regional museum of local lore R.F.Fayazova, who contributed a lot in 1968 into the studying of this surprising place and by that helped archeologists to make many historical discoveries. Namely:

• Excavation of archeologists  discovered the evolution of Buddha images, starting with primitive and finishing with detailed. These images are considered to be one of the most ancient in the world.

• In the same 1968 there was found improbably expressive sculpture at the entrance of the temple complex of Fayaztepa which is dated I-III century AD. It was rather spoilt by time and barbarity of aggressors, but the head and separate parts of the body, and also considerable sizes indicated that it is Buddha. Now this historical discovery decorates the museum of history of Uzbekistan in Tashkent. 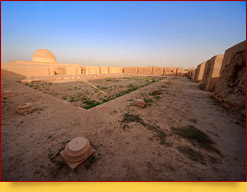 • Fayaztepa complex has the area about one and a half thousand square meters and consists of Vihara temple, located in the centre, a monastery and various constructions on perimeter of the complex, necessary for economic needs. 19 premises with deep alcoves are there in total. At the entrance of sanctuary there is remained fragment of Buddha head with aureole. To the right of it there are numerous figures of bodhistavas - people with illuminated confession, decided to become Buddha - monks and usual people, and also kings worshipping Buddha. To the left there are two figures of Buddha in the full size, figures of women are smaller

• Already by the end of I century here there was water piping, taking the water from Amu Darya.  Life subjects - ware, furnaces and so forth, discovered by archeologists on the extensive area, indicated the considerable sizes of kitchen premises. And, of course, there are living premises. On an opposite wall there are presents givers in Kushan vestments.

• The unusual sculptural group underlines the value of historical finding: Buddha is sitting under the sacred tree bodhi (the enlightenment tree), and two monks on both sides from him. All scene is carved out from the solid lump of limestone, covered by gilt and joins the arch with peaked top.

• Most likely, in one of the economic rooms there was a  potter making vessels which were donated in considerable quantities by laymen to the temple. There nearby was a person deducing on these vessels by ink donative inscriptions, words of prayers and ornamenting the gifts by "foot of  Buddha», «bodha», "wheel of law»  Then the vessels were charred  in the furnace which was found in hundred metres from a temple.

• In IX century ruins of the temple-monastic complex of Fayaztepa took the shape of the hill. where was hidden the treasure of silver Omeyad and Abbasid dirhams.

• Now Fayaztepa complex is an open-air  museum, and here was opened scientific centre for the studying of it.