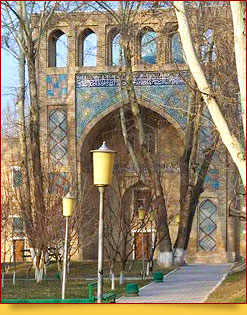 The Mausoleum of Yunus-Khan was built in the XV century and in an unusual style for Uzbekistan - khanaka. Usually constructions built as khanaka-shape are associated with dervishes and Sufi Muslim cult. Large two-storey Mausoleum amazes not only with its size but also with architectural features for example the colonnade on the elevation of the building (revak).

The upper parts of the Mausoleum were destroyed by an earthquake, in 1571, and restored after fourteen years. The dome of the Mausoleum was reconstructed in 1970. Drawings of the building were not preserved, so the full reconstruction of the original architectural looks failed. 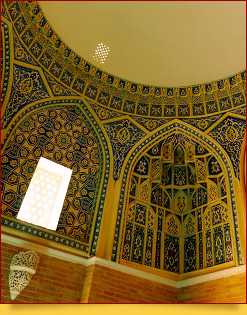 Yunus-Khan was a descendant of Genghis Khan and belonged to Chagatai Khanate. At the same time, he was related to the Timurids - Mirzo Ulugbek and his grandson Zakhiriddin Babur (son of the daughter of Yunus Khan Mihr Nigar) - the great poet and statesman who founded the Mughal Empire and wrote "Baburnama.

Yunus-Khan was born in 1416.  At the age of thirteen, he lost his father, after more than twenty years he lived in exile in Iran, in the city of Herat, then in Yazd, where he got an excellent education. Yunus-Khan was taught by the famous historian Sherefeddin al Iyezdi - the famous author of chronicles "Book of Victories" ("Zafarname") who served at the court of Amir Temur. Under his guidance Yunus-Khan studied literature, theology, and Arabic and Persian languages. Future ruler had some good creative abilities - he wrote poetry, composed songs and enjoyed singing, playing the musical instruments.

When he was forty years old, Yunus-Khan returned to his homeland, where he became Khan of a Mongolian nomad camp and ruled till his 69. After his death his sons built the Mausoleum of Yunus-Khan, which is still one of the most important architectural monuments of the Timurid era.

The Mausoleum of Yunus-Khan hides many mysteries. For example, once the doors of the hall were musical: between the door leaves skilled craftsmen built an ancient Uzbek musical instrument - chang. Furthermore, in the hall there was no deposition detected. Why? It still remains a mystery.