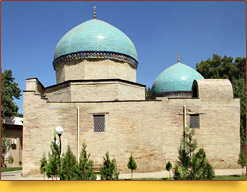 You have just arrived to the capital of Uzbekistan - city of Tashkent, and having seen a little on your way to the hotel you are asking yourself: where are those promised exotics, ancient architecture, which is so unique and attractive? Don’t make hasty conclusion. Most probably Tashkent is the first point on Your fascinating route across Uzbekistan, but this doesn’t mean that it got nothing to offer to You. Tashkent, as any other big city of Uzbekistan, can brag of a considerable quantity of sights. Yes, Tashkent is a modern city, with developed infrastructure, blazing showcases and advertisement placards, but shall not it be forgotten that its history goes back to 2200 years. And it possible to find an ancient place here as well.

If You are a history connoisseur remember the word “Shiekhantaur” - it will serve You as a kind of password to enter the atmosphere of ancient Tashkent.

Sheikhantaur complex - is the most ancient buildings, remained in the capital till nowadays. Right here was buried the great Sufi (follower of a mystic stream of “Sufism” in Islam) deeply esteemed Muslim, Sheikh at - Tahur (Sheikhantaur), and later many other noble men - the regents of Tashkent and their associates. But time and nature are frequently ruthless to the creations of a human - only three buildings out of many mausoleums, mosques, and headstones, which only a century back were making up Sheikhantaur complex, remained till nowadays.

The heart of the complex is the mausoleum of Sheikhantaur itself, which was built over the grave of the great Sufi by the order of Amir Temur at the end of XIV century. It can’t be distinguished by the magnificent decoration and completely matches with the manner of Sheikh Khavendi at-Tahur, who preached modesty and asceticism: the building is of familiar shape, made of usual bricks, supplemented only with light-blue patchwork of majolica over the entrance. The mausoleum consists of two premises, in one of which buried Sheikhantaur himself, and in other -his spouse and son. 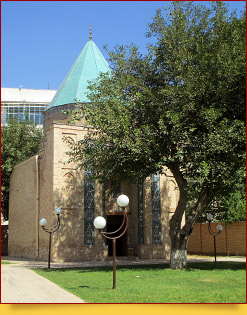 There is another mausoleum situated close to Sheikhantaur mausoleum, which singles out with its unusual architecture, that is: cone-shaped dome, which is not typical for the buildings of that region. It can be partly explained by that this is the last home of Toli-biy, also known as Kaldirgoch-biy, who ruled in Tashkent in XVIII century, and was expatriate form Kazakh family. He was a follower of Sheikh at-Tahur, and got famous because of his wise sermons and struggling against foreign invasion to the Central Asia.

A bit separate of those considered two buildings, there is the third and the last remained building from Shekhantaur complex - mausoleum of Yunus-khan of Mogolistan, one of the descendants of Chingiz-khan. This mausoleum, built at the end of XV century by the sons of Yunus-khan, singles out not only with its size, but also with decoration. It looks more grandiose at the background of mausoleums of Sheikhantaur and Toli-biy, and speaks about the magnitude of resting regent, who was the khan of Mogolian ulus and descendent of Temurids. The decoration of facades is Arabic ornate lettering and traditional ornament, and the entrance into the mausoleum is opened by the perfectly decorated door.

As some of the historians suppose, this place, before it became the last house of sheikh, was one of the sacred places of Zoroastrianism-pagan religion, spread on the territory of Uzbekistan before formation of Islam. The fossilized trees embodied in old photos of the complex on the both sides of the pass, leading to the main sight of the complex, testify to it. One of those trees, so called Saur of Iskander (Alexander the Great), near to the headstone of the sheikh, remained up to nowadays, and is a kind of evidence of antiquity of this memorial of history.

Thus was fulfilled the will of the great Sufi, who wished to be buried in the shade of the trees, where Alexander the Great himself used to enjoy the coolness.

A very special atmosphere is created in the shade of the trees, where this ancient buildings are getting lost, which makes You to forget that You are in the modern city. And with the help of the sacred place and understanding of the antiquity of this place, one can always feel conciliation and tranquility here. May be this is why Sheikhantaur always was the place of attraction and the source of inspiration for the people of arts. 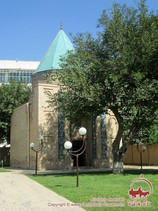