The tomb of Khodja Daniyar as muslims call him, or a bibilical prophet Daniel as Christians call him, or Daniel as one of the four great Judaic prophets, is situated next to the Siab river between the Afrosiab hills. Arguments about him are still in progress - whose body exactly is in this mausoleum? 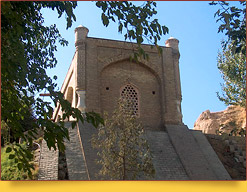 Daniel, which is translated from Jewish as ‘Judge is God’ or ‘My Judge is God’, was born in the Holy Land of Jerusalem in 603 B. C. He was the descendant of David and Solomon. In 586 B.C. Israel was conquered by Nebuchadnezzar. After successful finishing school Daniel was employed to the tsar’s court as a court dignitary. Daniel has a special gift: he could explain dreams very exactly including Nebuchadnezzar’s ones. Thanks to this gift the tsar appointed him one of the closest advisers.

Having got the revelations about the future of the world’s peoples from above Daniel wrote a prophetic book in Jewish and Judaic Aramaic which consisted of 14 chapters. In his old age Daniel moved to Susa city, where he finished his mundane path and was buried in the tomb of kings. There is a popular belief that Daniel’s spirit protects against all troubles and brings prosperity.

But how did the relics of the saint get to Samarkand? According to legend this mausoleum emerged just because Amir Timur wanted Samarkand and its residents to get protection and welfare thanks to the patronage of the spirit of Daniel. During his regular march to Asia Minor Tamerlane couldn’t conquer Susa. Theologians told him that the city was protected by the prophet Daniel’s holy relics. Tamerlane signed an agreement he would leave the town if he was allowed to take the saint’s right hand. According to legend the horse carrying the relics stopped dead. And when it hoofed there was a miracle: a healing spring gushed out from under the ground. Then it was decided to bury Daniel’s relics right here, next to the Siab river. 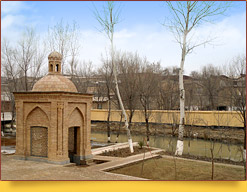 Many stories are also connected with the length of the tomb. The mosque servants reconstructed the tomb more than once asserting that the saint’s bones grow during especially successful years. So today the length of the tomb is 18 metres. People say that the hand of Daniel will grow until it encircles the entire planet and then a paradise will come on earth. According to another legend Tamerlane decided to build the tomb of such a length that enemies and grasping couldn’t find the relics.

Another legend says that it’s not the saint’s relics but the ashes from the tomb of Daniel are buried in Samarkand. As generally known according to canons of Islam burial of the dead must be immediate and it is not allowed to disturb the remains. Being Muslim Tamerlane couldn’t afford to take part of the remains even for such noble purpose as prosperity of the capital of his empire. So Timur took the land from the tomb of the saint and having mixed it with Samarkand ground, made a grave on that later erected a mausoleum.

Before the construction of the mausoleum the tomb of Daniel was covered by the river rock and there were sacred poles at its head. A beautiful six-dome kubba (qubba) was erected over the burial in 1900. It was the same colour as the pistachio tree growing beside it. Many tie pieces of fabric to the branches of the tree making wishes and people say they come true. Today there are five of the six domes. 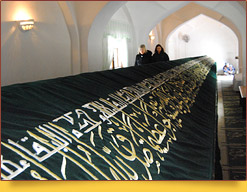 Another miracle is a spring at the foot of the mausoleum. Its pure glacial water is not only tasty and healthy but it has a wonderful characteristic to heal not only the body but the soul too.

Everyone who comes to the mausoleum must drink some water from this spring and make an ablution.

Muslim amulets are sold around the mausoleum. People buy these amulets and ask the prayer inside the mausoleum to ‘read on the amulet’ for all goods. You should enter the mausoleum without shoes - everything inside is covered with carpets and kurpachas (national blankets). You should walk round the grave covered with green velvet with gold embroidery on the edges in silence three times. After that everybody sits down and prays.