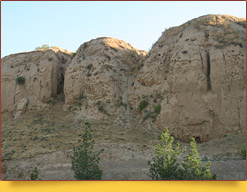 The ancient settlement of Afrasiab with an area of over 200 ha (founded in the 7th-6th century BCE and destroyed in the 13th century) is situated on the outskirts of present-day Samarkand (also spelled Samarqand), to its north, represented today by a group of greyish-yellow hills. According to a majority of researchers, Afrasiab is believed to be the ancient city of Marakanda (Marokanda), the capital of legendary Sogdiana (Sogdia).

Archaeological excavations revealed that as far back as before the Common Era Afrasiab was a major Central Asian cultural and trade centre. The artefacts excavated on the site include terracotta statuettes, beautifully ornamented earthenware, fragments of ossuaries and tools, various glass and metal items, adornments and coins. Among the most remarkable finds are fragments of a mural currently displayed in the Afrasiab Museum of the History of Samarkand located in the territory of the site. This famous wall painting is a large composition supposedly representing a wedding procession: a rich woman on a white horse is riding at the head followed by other women on horsebacks and men with swords and daggers on camels. Other finds include bas-relief landscapes and some interesting paintings smaller in size depicting walking men and women in ceremonial clothes carrying valuable presents and real and fantastic animals.

The city was encircled in strong fortified walls protecting a majestic ruler’s palace, market square, mosques, bathhouses, caravanserais, residential blocks and workshops, including a famous one specialising in the production of paper. Afrasiab also boasted an advanced water supply system consisting of a network of lead pipes. All this testifies to a high level of culture and arts in Afrasiab at that time.

Historians believe that the city was destroyed by a fire during the Mongol invasion of Central Asia. Its inhabitants never restored it and settled in the territory next to ruined Afrasiab. That was how Samarkand we all know today emerged.