Located in the western part of Ichan-Kala, Muhammad Amin-Khan Madrasah built in 1845 - 1855 still impresses us with its splendor. It is the largest Central Asian madrasah. The Arabic inscription above its entrance says ‘This beautiful building will stand to please the descendants forever’. 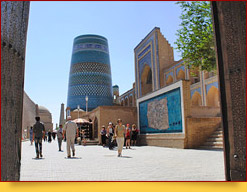 It was Muhammad Amin-Khan who conceived this Khiva’s largest madrasah and made sure its project was implemented. He loved large and splendid structures. He also initiated the construction of the tallest minaret (known as Kalta-Minor Minaret) to be 80 meters tall - taller than Kalyan Minaret (46 meters) in Bukhara and Qutub Minar (78 meters) in Delhi. However, the khan was killed in a fight against Turkmens during his Khorasan military campaign, and the implementation of the grandiose minaret project stopped at a height of 29 meters.

The construction of Muhammad Amin-Khan Madrasah was completed though. The size of the building is really impressive. The madrasah has 125 hujra ‘cells’. Each of them on the first floor has two rooms. The ones on the second floor have little balconies. Such balconies had never been built in madrasahs earlier. The madrasah could hold up to 260 students at once. It also housed The Superior Muslim Court Office.

The five domes and corner towers complement the splendor of the structure. The building is richly decorated with glazed bricks and traditional majolica; all the doors bear ornamental carvings.

Today Muhammad Amin-Khan Madrasah is used as a hotel.