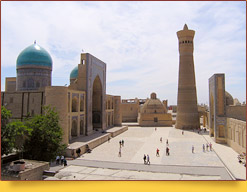 Kalyan Minaret, the symbol of the city, is the oldest of them. It is almost 9 centuries old, and it has never been restored. Built of fired bricks only, it was erected in 1127 by order of Arslan-Khan of the Karakhanids (also spelled Qarakhanids). The minaret is 46.5 meters in height; its diameter at the base is 9 meters. Its grand tapering body is topped with a lantern rotunda having 16 arched windows under a stalactite cornice. The inscription on the cornice says that the minaret was designed by an architect Bako. The minaret once featured another round section over the rotunda; now it has only a cone-shaped top remaining. There is a bridge connecting the minaret with the roof of Kalyan Mosque. You can use it, as well as the narrow brick spiral stairs inside the tower, to get to the rotunda to enjoy the fascinating panoramic view of Bukhara.

Kalyan Mosque (’great mosque’) was built during the reign of Ubaidulla-Khan at the site of a destroyed Karakhanid mosque in 1514. It was the second largest mosque - behind Bibi-Khanym Mosque - in Samarkand; it could hold 12,000 people at a time. The mosque has been the main Bukhara mosque for 500 years already. It features the traditional architectural design typical of the Timurid times - a rectangular plan with four iwan structures (an iwan is a rectangular hall or space, usually vaulted, with one end entirely open). The main entrance called the Eastern Entrance is a large elevated portal decorated with mosaic. The main building of the mosque has two blue domes on the sides. Along the sides of the inner yard run vaulted galleries with 288 domes on 208 pillars. The facades are decorated with glazed tiles and mosaic.

Mir-i Arab Madrasah (‘Arab emir madrasah’), which is still a functioning madrasah Islamic school, stands across from the mosque. The construction of the madrasah (1535 - 1536) was funded by Ubaidulla-Khan, Shaybani-Khan’s nephew. It was built for the sheikh Abdullah Yemeni, the spiritual mentor of the early Shaybanids. In order to build the madrasah, Ubaidulla-Khan had to sell 3,000 captive Persians he had as slaves. According to another source, he gave Abdullah Yemeni, Bukhara Islamic leader and his teacher, also known as Emir of the Arabs, all the loot from his raids to pay for the construction.

The second largest Bukhara madrasah behind Kukeldash Madrasah, Mir-i Arab Madrasah has two floors with 114 hujra cells around a four-iwan yard and two cruciform halls. The first hall was used as a mosque and a classroom. The other is the mausoleum of Ubaidulla-Khan, Abdullah Yemeni and other noblemen. The wooden tomb of Ubaidulla-Khan is in the center of the mausoleum. Abdullah Yemeni’s stands at its head. The main façade of the madasah has two-tier loggias on either side of it. The madrasah is decorated with mosaic and multicolored decorative patterns. Today the madrasah is still a functioning Islamic college where muftis-to-be study the intricacies of Islam. 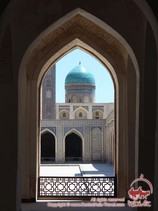 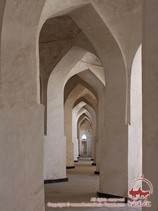 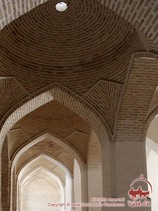