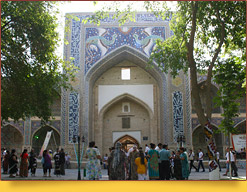 Nadir Divan-Beghi Architectural Ensemble consists of a madrasah, a khanaka Sufi hospice and monastery, and a hauz pond. The ensemble was constructed by order of the vizier Nadir Divan-Beghi who served for Imam Quli-Khan, one of the most powerful rulers of Ashtarkhanid dynasty.

Nadir Divan-Beghi Madrasah was built in 1622. It is located in the eastern part of the Lyab-i Hauz Square. The vizier had initially planned and constructed the building as a caravanserai but Imam Quli-Khan unexpectedly called it a madrasah at the opening ceremony. That was why they had to build on the portal, façade side towers, loggias, and the second floor with hujra cells for students to stay in. The main feature of the madrasah is its absence of a classroom; they just did not build it on. The portal is decorated with two mosaic pictures of the mythical flying creature Simorgh (also spelled simurgh, simurg, simoorg or simourv) holding fallow deer with its claws and heading towards the sun. The inscription on the portal says, ‘Allah is great and Muhammad is his Prophet’. In 1993 Nadir Divan-Beghi Madrasah was included in UNESCO World Heritage List.

There is an interesting legend about the construction of the madrasah. When Nadir Divan-Beghi was getting married, he gave his fiancée a gift of just a pair of earrings on the wedding day. She felt offended by such a modest gift and said that the groom’s family was rich enough to be able to give her more than just earrings. 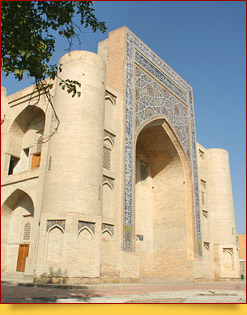 The vizier, however, did not comment on these words. When his architectural ensemble had been completed a few years later, his wife said bitterly that he had skimped so much on the wedding gift and spent so much on the construction. In reply to this the vizier asked her to open her jewelry box and look inside. She did so and saw one of the earrings was missing. She began to yell it had been stolen but the vizier said, ‘Darling! It is all the structures that have been built on it! You could not appreciate my earrings, so appreciate what has been built thanks to one of them!’

There is a large rectangular hauz pond between the khanaka and the madrasah. Its edges have stairs and are made of solid blocks of yellow limestone.

Nadir Divan-Beghi Architectural Ensemble is very popular with the residents and guests of Bukhara. The place retains an amazing Oriental aura and allows its visitors to learn a lot from Uzbek cultural heritage through watching, listening to guides and even enjoying various folklore performances.

Apart from being an outstanding architectural monument, the old Nadir Divan-Beghi Madrasah is famous for a folklor show with folk dance accompanied by traditional live music and fashion show held regularly in the evenings within its premises.

The folk show at the Nadir Divan-Beghi Madrasah will enable you to feel the bright and colorful world of Uzbek culture, which is why it is so popular among tourists. 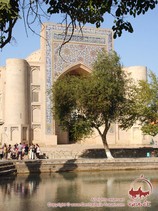 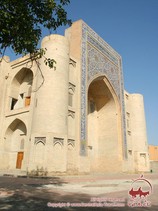