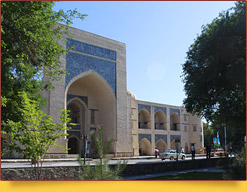 In Bukhara, near the famous historical complex Lyab-i Hauz, the well-known architectural monument Kukeldash Madrasah is located (built in 1568 - 1569). It is the largest Bukhara madrasah and one of the largest ones in Central Asia. It was built during the reign of Abdullah-Khan II and was funded by Bukhara governor Kulbab who ruled the city under several khans and managed to maintain good relations with all of them. For his close relationship with the khans the governor was given the title Kukeldash, which was one of the highest standings in the khan’s court and meant ‘a milk brother’. Later the madrasah was named after him.

Many people believe that Kukeldash Madrasah is part of Lyab-i Hauz complex, but it is wrong: archaeological excavations and research proved that the madrasah is a separate structure that bears no relation to Lyab-i Hauz.

Kukeldash Madrasah was also a unique building of its time in terms of architecture. Virtually all the madrasahs then had the similar design of a solid rectangle with a large decorated portal and a courtyard. Kukeldash Madrasah has no solid walls. Instead, they are walls with niches and balconies with stucco ornaments. There are 160 hujra cells in the madrasah, filling the both floors along the perimeter of the spacious courtyard. 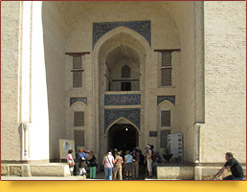 Kukeldash Madrasah was built by the best master craftsmen of its time. The decorative vaults feature stucco arches in numerous combinations. The mosaic of the front gate was made without glue or nails. The main entrance is covered with mosaics showing beautiful geometric decorative patterns.

The madrasah has several times changed its purposes during its history. Besides its main purpose of an Islamic school, it was used for a number of different needs. In the 18th c it was used even as a caravanserai.

The madrasah still remains in good condition despite the fact that once the portal was heavily damaged by an earthquake and was fixed with just iron braces. During the reign of Bekler-Beg its second floor with blue domes was dismantled for bricks. Thanks to the efforts of enthusiastic master restorers who took the reconstruction initiative, the madrasah was given back its original appearance. Now the building is again under reconstruction, which is to be completed by 2020.

Sadriddin Ayni, an outstanding Central Asian poet and writer of the modern times, lived and worked in the madrasah. He died in the mid-20th c, and the northern part of the building houses his memorial museum now. It shows his belongings and some of the manuscripts.