Throughout the history people assigned meaning to various natural phenomenon.  As a result weather events, animals and plants became symbols of something a man possessed or wished. 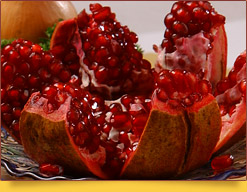 This is true for pomegranate assumingly originated in second millennium BC. As it was eaten in prehistoric times by primitive people, and eventually became more than a food. Thanks to the bizarre structure with the blood-red grains pressed to each other and clad in a strong peel, pomegranate eventually became a symbol of strong union or indissoluble marriage. An abundance of grains, in some varieties it can reach two thousand, made pomegranate a symbol of fertility. This is confirmed by manuscripts of ancient Greece, and in different folklore tales. In Christian culture pomegranate, along with a lily and a bee, is a symbol of the Virgin Mary. The scarlet fruit was also important in the eastern tradition. The crown-like form of pomegranates’ carpel made it a symbol of the monarchic power, and as the result its image was often embodied in wood to decorate the scepter of rulers.

In addition to heraldry, the "granular apple" managed to leave traces and in medicine - the useful properties of pomegranate were seen in ancient times. The mature fruit contains vitamins (A, B, C, E), antioxidants, fructose and glucose, tannins and organic acids, as well as calcium, potassium, iodine, silicon and iron. Stewed pomegranate seeds and peel possess choleretic effect, it helps to cope with various kinds of gastrointestinal and heart diseases. Fresh pomegranate juice helps to rise hemoglobin level, support body's ability to resist infections, improves appetite and raises the mood. 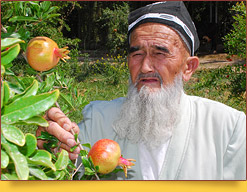 The taste of pomegranate should not be left aside either.  The vivid toning effect made it the basis for a large number of drinks, while the combination of sweet and sour tones are successfully used as additives to different dishes, both meat and vegetarian. Wines and marmalades, ice cream and sauces are made from a pomegranate, moreover, the juice is an ingredient for kebab marinate, that gives meat an amazing softness and aroma.

The cultivation of pomegranate is widespread in countries with a hot climate, to which Uzbekistan also fully belongs. So there are a lot of pomegranate gardens. Along with apricot or persimmon, pomegranate can be found on the cities’ streets and parks. Although, it’s hardly recognizable.  The reason is because pomegranate trees do not have an outstanding height and trunk sometimes is so curved that a tree looks more like a bush. It’s a long-living tradition to plant pomegranate in patios and front gardens.

In the evening pomegranate trees are sprinkled with water so that even the lightest gust of wind turns them into natural air-conditioners, pleasing everyone with coolness. The benefits could be hard to understand for those from northern latitudes – you would think that evenings are cooler anyway. But after the whole day under the withering sun the earth and buildings are so hot, they would give off heat throughout the night. In summer many locals practice sleeping outdoors.

Such measures trick to lower the temperature a bit. Otherwise even being outdoors even at night could be too hot. Of course other trees can be used for these purposes too, but the density of the pomegranate leaves and their low growth are the best for it.  Unlike shrubs pomegranate allows to feast with late autumn and winter delicious fruits. After harvesting they are stored in boxes with calcined sand that does not allow the pomegranates to dry out. 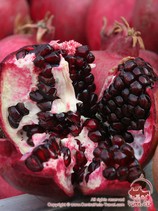 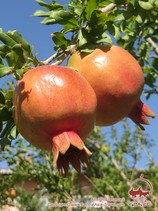