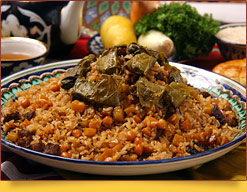 Dishes similar to plov made of rice, meat, onions and carrots may be found all over the world but, however delicious, they are not the real thing. To taste this genuine wonder of eastern cuisine you have to go to Uzbekistan, where delicious aromas abound and wonderful recipes have been developed and perfected over the centuries. Uzbek plov is famous, a favorite of tourists, and chefs vie to prove their recipe is the best.

Plov is known and loved throughout Central Asia, but it is Uzbekistan where it originates and where the best varieties are to be found. Here plov accompanies momentous events from birth to holidays, anniversaries, weddings, family reunions and wakes.
This may seem repetitive, but in fact it is not: there are over sixty different plov recipes in Uzbek cuisine. In every area it is cooked in a special way, and an experienced gourmet would easily recognize the origins of a given plov, whether Samarqand, Fergana, Tashkent, Kashkadarya, Bukhara or Khorezm. Plov also differs according to the occasion: a wedding plov is the most magnificent, a holiday plov a bit less exotic, and there is even an everyday plov. These vary both in cooking technique and ingredients: plov is usually made with mutton, but it is sometimes replaced with kazi (horse meat sausage), sheep tail fat, chicken, pheasant or quail. Sometimes even the rice is replaced by buckwheat, wheat, mung beans or even vermicelli. Most types of plov include a similar set of ingredients: mutton, rice, carrots and spices, and the classic technique involves three main stages: the preparation of zirvak (liquid plov base), the adding of the rice and the final cooking. 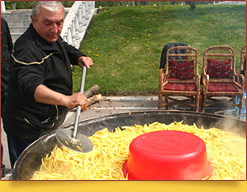 How old is plov? The first references to a dish of rice and meat date back to the 10th and 11th centuries. Chronicles mention that plov was served as the main dish at weddings and important holidays. At that time it was only the rich that could afford it, for others it was an option only on feast days, or not at all. From then on plov was valued not only as delicious holiday fare, but also for its healing properties: it helped restore strength and resolve after heavy labor or battle.
No wonder Tamerlane included plov in his army’s rations. It is said that while planning an assault on Ankara he was grappling with several seemingly contradictory factors: a large army, long distances, fast movement, swift attack and transportation of supplies.

One of his advisors told him about a wonderfully delicious and nourishing dish, instructing:
“Take a big iron bowl. It should be old and well-used. Add meat from a ram that is not too young and not too old, some of the best rice, young carrots and the bitter onions that sting as strong as an Emir’s sword.
Cook it all until Allah himself smells the aroma, and the cook falls unconscious, overwhelmed by the taste of this divine dish”.
The legend says that even a small bowl of plov gave Tamerlane’s warriors strength for several days. It became the main food of his army and helped it to countless victories.
There are also sources which indicate that plov was known to the soldiers of Alexander the Great. 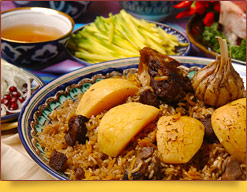 Another legend tells how the name “Palov osh”, or plov, came about. Once upon a time the ruler Of Bukhara’s son fell in love with the daughter of a poor craftsman. Sadly, local laws prohibited such a marriage. The Prince lost his sleep and appetite, but no one around him could understand what was happening. After a while the boy became so exhausted that his relatives took him to Avicenna, but the Prince would not divulge his worries because he thought there could be no cure. Avicenna decided to identify the reason for the patient’s anxiety by his pulse. He called a person who knew Bukhara and its people well, and asked him to start naming all the city districts one after another. When one district was announced, the Prince’s pulse went up. The great physician noticed this and askedhim to start naming the dwellers of that district. As soon as the girl’s name was pronounced, the boy’s pulse rose so high that there could be no more doubt. Avicenna prescribed treatment: the Prince should eat “palov osh” at least weekly until his strengthis fully recovered, and then marry his love. Perhaps this is the reason why plov is a mustat wedding feasts. So the name “palov osh” is in fact an acronym for its components: p - piyoz (onion), a - ayoz (carrot), l - lakhm (meat), о - olio (fat), v - vet (salt), о - ob (water), sh - shali (rice).

This is not just a beautiful legend. Plovis indeed made of these ingredients. In timerecipes have changed and been refined, and more ingredients added: raisins, peas,pepper,barberry, quince, garlic, apricots and manyother products and spices. Plov is usually served on big ceramic or porcelain plates. Pieces of meat are placed on top of the rice, as are garlic or quince, if used. Centuries ago it was served to each person separately on flat round breads, and to this day many people eat it with their hands, like their ancestors. Plov is always accompanied by salads made of fresh or marinated vegetables - tomatoes, cucumbers, radish, and fiuits and herbs such as pomegranate, dill or basil. Salads not only provide vitamins, but are essential to aid digestion of the plov, which is usually quite heavy. Green tea is also a must..

Plov is a treat for true gourmets, especially men, and tradition dictates that only men can cook a genuine holiday plov. It is the pinnacle of Uzbek cuisine and cooking skills - Uzbek chefs say that if you have mastered plov, any other dish will be easy. 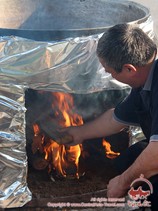 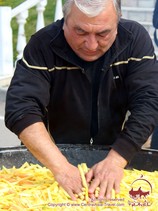 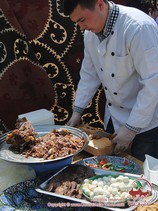 © Central Asia Travel
All rights reserved. No part of this publication may be reproduced without written permission of the copyright owner.