The fame of creating real masterpieces, to which one wants to return again and again, is equally enjoyed by Nature and Man. In the first case, we are talking about breathtaking magnificent sceneries and landscapes in the other - about grandiose objects erected by people at different times. Their charm is explained by the feelings, which appear when they are contemplated, consisting of pride in our kind and surprise at the greatness of the abilities of a Man. 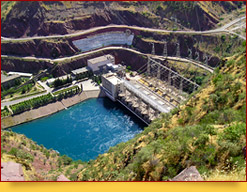 Sometimes amazing combinations occur when the natural beauty merges with the fruit of human genius. One of such rare examples is in Tajikistan.  Among its mountain peaks, at an altitude of more than 800 meters above sea level, the Nurek Hydroelectric Power Station is located, which is  the most powerful hydroelectric power station in Central Asia, the dam of which is listed in the Guinness Book of Records as the highest bulk dam in the world.

The dam height of the Nurek Hydroelectric Station is 304 meters. For an ordinary man inexperienced in technical matters this figure may not seem very impressive. But... imagine the Eiffel Tower (the initial height of which was 300 m), and then look at the steep mountain roads of Tajikistan, sometimes completely devoid of any coating, and it becomes clear that to erect such an epoch-making structure was not just difficult, but double difficult. 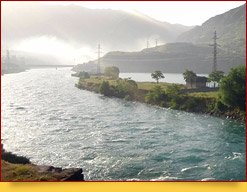 The fact that this area is considered to be earthquake-prone did not facilitate the task. Under such conditions, the existence of the Nurek Hydroelectric Station on one of the largest rivers in the region - Vakhsh - is still recognized by the world community not only as a miracle, but also as the summit of construction skill. No one in the West believed in the success of such an undertaking until the newly built hydroelectric power station had worked to its full potential. The construction of the Nurek Hydroelectric Station was started in 1961. It was impossible to build an ordinary concrete dam here, and then it was decided to pour into the Vakhsh riverbed the same rock from which the surrounding mountains were formed, by analogy with natural dam.

Today, the Nurek hydropower plant, with a capacity of 3,000 MW, produces about ¾ of all the electricity in Tajikistan. The impression of the seen creation, and even located in such a picturesque place, overwhelms the soul no less than the frantic Vakhsh that fills the reservoir of the station. 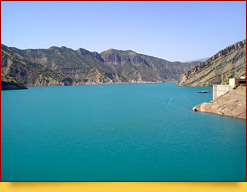 Separately, it is worth mentioning the Nurek reservoir, which arose as a result of the construction of the hydroelectric power station. The area of the lake is 98 square kilometres, stretched over seventy kilometres. It is filled with clear fresh water, the source of which is the ice crowns of the eternal Pamirs. A particularly stunning picture opens when you sail on the reservoir by boat. Closer to the middle of the lake, it seems as if the boat is in the centre of a giant pagan temple, where the giant mountains are old priests, frozen and mentally repeating their spells. The energy obtained in the moment is so strong that it seems as if  brilliant blue sparks of the tone of the water  are  flowing down from  their fingertips. The air poured over the lake is so fresh and fragrant that the body perceives it as a different state of matter, pacifying and at the same time dizzy with delight. And it becomes unimportant what in this “jewellery” is a precious stone, and what is its skilfully crafted frame. The surrounding landscape and the station created by man merge so harmoniously and beautifully that at times it seems like it was originally a hydroelectric power station, and only then Nature created everything around it. 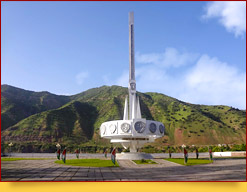 In 1960, on the site of the village of the same name, the city of Nurek was formed, located at an altitude of 885 m above sea level. Not far from Nurek at an altitude of 2200 m the optical-electronic complex “Window” (“Nurek”) of the space control system (SKKP) is situated, which is part of the Russian Space Forces. Unfortunately, its territory is closed to outsiders, which has generated a lot of rumours among local residents. Some argue that this is some secret radiator that controls the climate, while others whisper about a secret base for conducting galactic-scale experiments, which inevitably affect the surrounding area, as result   the weather here becomes  too rainy or, on the contrary, arid.

Of course, such legends are doubtful to an educated person, but the desire for an  enigma and mystery lives in the soul even of the most sceptical person. In any case, getting to know Nurek and its surrounding brings a lot of positive emotions and a certain share of sensations of a mystical nature.