Palace of Peace and Reconciliation

Grandiose glass pyramid in the centre of Nur-Sultan (Astana) 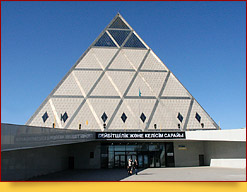 The Palace of Peace and Reconciliation is a giant pyramid of glass and metal, built in the centre of Nur-Sultan (Astana), the capital of Kazakhstan. The project was conceived as a centre of theology and religious tolerance, a symbol of friendship, unity and peace. The author of the architectural solutions is the famous British architect Sir Norman Foster, who has also designed the projects of other major attractions of the capital: the Baiterek monument and the Khan Shatyr shopping mall and entertainment centre. The Palace of Peace and Reconciliation expresses the general concept of Nur-Sultan (Astana) as a city of religious and ethnic tolerance. The building was constructed to host the II Congress of Leaders of World and Traditional Religions and it was opened in 2006.

The building concept has a lot of symbolism. It is built in the shape of a regular pyramid in full accordance with the principle of the Fibonacci Golden Section: the height of the pyramid (62 m) equals to the length of the side of  its square base. In the interior an Egyptian theme can be traced. The central hall of the Palace of Peace and Reconciliation is called the Cheops Atrium. A master plan for the development of Nur-Sultan (Astana) until 2030 is shown here. 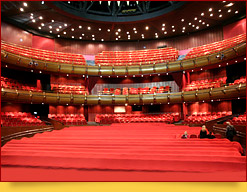 The area of the palace is 28 thousand square meters, there are conference halls and exhibition areas, as well as art galleries, presentation complexes and a winter garden, which is known among the  people as " The Hanging Gardens of Astana".

A Montserrat Caballe concert inaugurated the  Opera Hall at the Palace of Peace and Reconciliation. The decoration of the hall in burgundy-gold tones, with a window at the very top that represents the sun, is  filled with elements referring to the Egyptian pyramids as well. The hall accommodates more than 1300 spectators.

The top of the pyramid of the Palace of Peace and Reconciliation is decorated with stained glass designed by British artist Brian Clark, depicting 130 pigeons that symbolize the multinational people of Kazakhstan.