The Medeu, a high-altitude skating rink near Almaty

The Medeu, the world’s largest high-altitude sports complex, is situated in a mountain valley with the same name, on the northern slope of the Trans-Ili Alatau Range, 14 km from Almaty, at an altitude of 1,691 m above sea level. What makes the complex really popular is a huge skating rink 10,500 km2 in area – the world’s largest rink operating 8 months a year, from October to May. The rink is field with purest water from a mountain stream, which allows athletes to demonstrate excellent results. The ice in the Medeu rink is 2.3 m thick and is kept in a perfect state with the help of a special freezing system not used elsewhere in the world.

The Medeu skating rink was opened in 1972. The mountain valley the rink is located in is hidden from strong winds and characterised by such climatic conditions as mild winters, optimal level of solar radiation and relatively low atmospheric pressure on most of the days, which makes the place highly popular among athletes. Skaters, figure skaters, hockey players and specialists in other winter sports use it to train and compete. Over 200 world records were set by men and women in different sports. 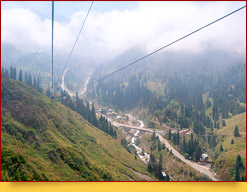 The Medeu ice arena ranks as one of Almaty’s most popular attractions not only among sportsmen, but also among ordinary people and the visitors of Kazakhstan’s ‘southern capital,’ who come here on weekends to skate. Up to 3,000 people can use the rink at the same time.

The sports complex is reliably protected against mud flows by the Medeu Mudflow Control Dam constructed for the purpose in 1966. The dam is situated south of the rink at an altitude of 1,733 m and is accessible via a long stairway of 842 steps, which is frequently used in skyrunning competitions.

Overlooking the sports complex is the famous Chimbulak (Shymbulak) ski resort. It can be accessed right from the Medeu stadium using the Medeu-Shymbulak cable car launched in 2011 to serve the 2011 Asian Winter Games. The mountain slopes surrounding the skating rink are covered with conifer forests and are very picturesque.

How to get to the Medeu: