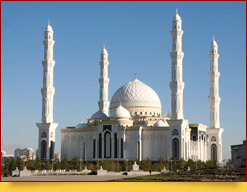 Hazrat Sultan is one of the largest mosques in Central Asia and the main cathedral mosque of Nur-Sultan (Astana). The mosque is located on the right bank of the Ishim (Yesil) river, not far from the Palace of Independence, the Palace of Peace and Reconciliation and monument “Kazakh Eli”.

The Hazrat Sultan Mosque is named after the famous medieval theologian and the head of the Sufi order Khoja Ahmed Yasawi, who was popularly called the Hazrat Sultan ("Holy Sultan").

The building of the mosque is the brightest example of classical Muslim architecture with modern details. The total area of the religious complex is more than 11 hectares. Here, up to 10 thousand believers can pray at the same time. The grandiose building of white marble from the facade is decorated with traditional Kazakh ornaments. The finish that looks snow white from afar begins to play with different colours from close distance. The largest dome, 51 m high, ends with a spire with a crescent moon facing Mecca. 77-meter elegant minarets frame the building on the sides. Fountains work in front of the main entrance, flower beds are placed, and  the backlighting turns on at night. Visitors can approach the main entrance along a black and white granite path laid out in the form of a traditional Kazakh ornament. In front of the main hall there is a spacious covered courtyard with a beautiful marble fountain. 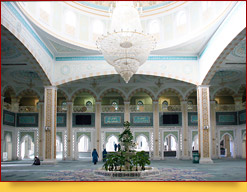 Hazrat Sultan resembles a fabulous oriental palace, luxurious and at the same time concise. The ceiling of the main hall is supported by massive columns, here you can see a three-ton chandelier. In addition to two halls for prayers (the main one is below and the hall for women is on the third floor), in the Hazrat Sultan mosque there are rooms for ablution (wudu) and for performing Muslim wedding ceremonies, as well as classrooms and lounges. There is also a restaurant serving halal dishes. Iftars (evening meals during the month of Ramadan), charity dinners and weddings are held here.

At the opening of the mosque, the First President of Kazakhstan, Nursultan Nazarbayev, presented the Silver Quran: an absolute copy of the manuscript of the Quran Usman on 162 sheets of 999 fineness silver.

The Hazrat Sultan mosque also contains the original of the Holy Quran, dated to the XII century and brought to Kazakhstan by Tamerlane (Amir Temur).