The main attraction and symbol of Nur-Sultan (Astana) 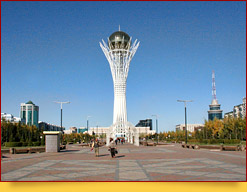 Baiterek is a futuristic tower in the capital of Kazakhstan Nur-Sultan (Astana), it is a symbol of the capital move, a new stage in Kazakh people’s life.

The Astana-Baiterek Monument is located on the left bank of the Ishim River (Yesil), opposite the Presidential Residence. A giant glass ball has been raised on 500 piles, which changes its colour at different angles, but more often it seems to be cast in gold. The idea of construction and the sketch of Baiterek belong to the First President of Kazakhstan, Nursultan Nazarbayev. He drew a sketch of the future tower on a napkin during a flight on an airplane. Nowadays that napkin is stored in the Museum of the First President.

The height of the steel barrel without the ball is 97 meters. This is a reference to 1997, when the final decision to move the capital of Kazakhstan was made.

The design and symbolism of the Baiterek tower are closely related to the traditional beliefs of the nomads. The Baiterek in them is a giant "tree of life" standing at the World River. It connects the worlds, since its roots go into the underworld kingdom, and the crown supports the sky. 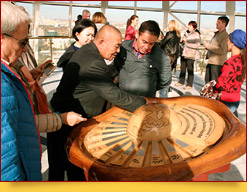 According to legend, the bird Samruk (an analogue of the bird of Happiness-Semurg) lives in the branches of Baiterek. Every year, Samruk lays an egg, which represents the Sun that is later devoured by the Idahar dragon, the creature who lives at the foot of this tree. In such way the Kazakhs depicted the struggle of good and evil, the change of seasons, day and night. The 22-meter golden ball on top of Baiterek represents the mythical Sun. And all the ornaments inside the complex are connected with the Samruk bird.

The Baiterek monument was created as the cultural centre of the capital. At a level of 4.5 meters underground there is an aquarium, cafe and art center. And in the "golden ball" at the level of 34 floor there is an observation deck with a view of the city. In 2003, when Baiterek was inaugurated, representatives of 17 religions performed their prayers in unison at the foot of it for the first time. This  became one of the main events in the life of the young capital, proclaimed a city of religious tolerance. In memory of this, a wooden globe with autographs of those who had participated in prayer was installed on the upper level of Baiterek.

Here there is another symbol of the capital of Kazakhstan,  the art composition "Ayaly alakan" ("caring hands"), which is Nursultan Nazarbayev’s hand imprint. It is believed that if you put your hand on the imprint, any desire will be fulfilled.