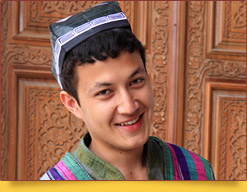 A tubeteika (a transliteration from Russian; also spelled tyubeteyka, tyubeteika; Uzbek: duppi, doppi, doppa or kalpoq; Tatar: tubatay; Turkmen: tahiya) is a Central Asian traditional peakless cap (also worn by Muslims in Russia), round or square. It is an important part of Turkic national costumes. The word tubeteika derives from the Turkic tyube (‘peak’).

If placed on a level surface, a round tubeteika looks like a yurt in shape. (A yurt, another regional cultural icon, is a strong circular domed dwelling structure of Central Asian nomadic peoples. It is made of skins or felt stretched over a collapsible lattice framework.)

Muslim men were forbidden from being bareheaded in public in the past, so a tubeteika was part of daily headwear for a long time in Central Asia. Today these caps are not worn universally every day, especially in the cities (except for elderly men). 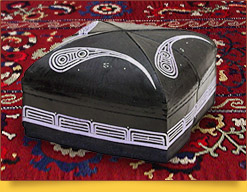 However, they almost always put them on during religious holidays (Qurban Bayram - Eid al-Adha, and Ramazan Bayram - Eid al-Fitr), namaz prayers, funerals and commemoration gatherings. (Since recently they have been wearing crochet prayer caps taqiyah imported from other Islamic states.)

They put on special children’s tubeteikas on newborns, as well as little boys during circumcision ceremonies. During a traditional local wedding the groom will wear a tubeteika too, which signifies he has reached manhood.

Central Asian tubeteikas, men’s and women’s, differ widely as to the local ethnic groups and provinces: they are rounded or square, with pointed or flat tops, adorned with various designs and made of various materials. In Turkmenistan, for instance, female tahiyas for unmarried girls even feature feathers.

Men’s tubeteikas are mostly plain, bicolor or tricolor, while women’s are multicolor. Uighur male ones, however, are an exception: they are decorated with rich designs made in golden and silver threads with beads. 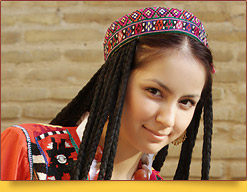 Many tubeteikas worn in the Pamir Mountains in Tajikistan feature Arian symbols. Samarkand ones, resembling ribbed domes, are characterized by piltaduzi quilting stitch. Bukhara female tubeteikas feature a lot of gold embroidery, while Tashkent male ones, made of green velvet, are plain.

Most tubeteika designs are symbols of imperishable human values or talisman images. A ram horn, for instance, symbolizes man’s vigor; a fish represents women’s fertility. The design Snake Trail is believed to protect from the evil eye, and so does the most popular white images of chilies or almonds on a dark background on the four faces of square tubeteikas - protecting the wearer from the north, south, east and west. These four faces also signify the four periods of a man’s life: childhood, youth, adulthood and old age. Sometimes they include decorative inscriptions in Arabic in the designs, such as ‘Let the tubeteika stay on the head and the enemies disappear’.