People devoted to mountains tend to “leave their hearts” in different mountains - some in the Fan Mountains, others in Himalayas. Every such person has a favourite Mountain of one’s own - the mountain that stays in one’s heart, the mountain that draws it like a magnet and shines in one’s memory brighter than others. My own “magnet” is seem to be “buried” somewhere in the Onion Glade at the foot of Peak Lenin. The magnet must be huge and very strong as every year, at the same time my mind and than my feet invariably bring me back there to the magic peak. Really, it is true when people say: “a foolish head does not leave one’s feet idle.” (I am joking)…

Indeed, the Peak Lenin’2007 season happened to be not of easiest ones. Well, who can say that any of the Peak Lenin seasons have ever gone easy? And this year’s season was not a simple one too. First surprise had been caused by Kyrgyz authorities who, just at the eve of the season, have forbidden any company of camping at the Onion Glade. First feeling about that decision was like: it is end of the world! But later developments showed: it was just a beginning of the end.

The point is that, due to its location, the original campsite at the Onion Glade (3,800m) was ideal for putting up base camps. The one who has visited there will never forget spectacular views opening up from the glade and one’s heart’s beating faster at the last turn, the dear turn, after which a “home, sweet home” - our dear Base Camp, always busy humming, - would appear in the night lights. Now all this has moved two kilometres northwards. And it is there now the new Base Camp lives its own live on the Edelweiss Glade (3,600m). The glade is not in the least worse than the previous one is, except it is located further away. There are not onions but mushrooms and, essentially, edelweisses that grow there on the glade. And there is lots more sun and lots less wind at the glade.

All in all, personnel and guests of the young Kyrgyz-Russian travel company “Pamir Expeditions” have soon accustomed to the new place and felt themselves quite comfortable there. The spot has a good scenery around: on one hand-side there is Peak Petrovskiy piercing the sky with its pointed top (excellent object for acclimatization ascents, by the way), on the other hand-side multicoloured red-green-brown hills stretch along and a cliff with rapid stream at the bottom of the canyon while, at the behind, there are clear-water lakes reflecting blueness of the sky and whiteness of the snow-covered mountain slopes and at the front - there it is: the Principal Mountain, Peak Lenin - a giant white massif that seems to obstruct the entire visible horizon. And there you are: then you immediately start thinking that everything else but the Mountain is insignificant and unimportant - so grandiose it is! No camera exists to capture and reflect whole deepness and charm of what human eye can see. Camera fixes only a picture but not a fraction of the inimitable high-spirit atmosphere that, for thousand of years, has always existed there in the very heart of Pamir…

The Pamir Expedition’s Base Camp (BC) is located now at 3,600m and is among those camps that mountaineers see first on their downhill from the Mountain. As you approach the BC, two flags (Russian and Kyrgyz), huge and bright, gradually emerge from behind of the multiple hills as are brand-new canary-yellow “semi-drum” tents - the only tents of the kind at the altitude - well seen not only from the track but from the top of the Mountain!

This year the BC’s infrastructure has undergone full renovation: new tents, new yurt, even new volleyball net have appeared - the fact that surely increased confidence and lessened worrying with guests about unruly might of mother-nature. And what a Russian “banya” (wet sauna) was available there! Such good banya can hardly be found even in well-developed major town, leaving alone whole Alay Valley! (Remark: I think Vladimir Demushkin of Moscow, who was among those first climbers on the top of Peak Lenin this year, could better than anybody else describe his impressions about the banya he had at 3,600m). First interim camp (Camp 1) has also had distinguishing features of its own. For the first time in the centuries-old history of “yurt architecture” a two-room yurt had been put up at 4,400m. The double-yurt module comprised a smaller room (lobby) and a big hall. Such peculiar architectural masterpiece had impressed even most versed pundits of architectural arts.

Other highlight of the season is that Peak Lenin is becoming a popular ski downhill destination. First ever group that arrived at the Edelweiss Glade this year happened to be a group of 17 mountain skiers from Slovenia. They managed to have a good and pleasant downhill from the altitude 5,300m and were very happy about themselves and the snow conditions on the slope. Positive statistics from previous years and this year’s achievements prove that mountain skiing has good prospects in this area.

Even more pleasing is the fact that Peak Lenin is becoming a “family holiday destination”, too. “Pamir Expeditions” positively view and actively encourage high-minded mountaineers who come to visit the area along with their family members. While father is conquering the transcendental summit his children are joyfully playing games in the fresh air and having easy and safe trekking in the environs of BC. Every one is happy! This year five Russians united under the jolly surname “Smeyuha” (“laughter” in Russian) have set such a good example. While father and companions were climbing, his wife and three children were happily spending their time by visiting round nearby lakes, picnicking, playing volleyball and games, which children are always so good to invent. In the future, “Pamir Expeditions” is planning to actively develop such family programmes so that more families could come here and enjoy their summer holiday together. Indeed, who can introduce children to mountains better than their parents can?

As far as weather is concerned, it has been, as always is the case, quite unpredictable. Unlike previous year when even Camp 1 had seen snowfall only for five times per season, this year we had seen a comeback of more “standard Pamir’s summer weather” - continuous snowing in the Camp 1, raining and winding in the BC, as it normally should be. This fact, compared with previous year, eventually reduced number of successful ascents. Still, the list of winners is quite impressive: 34 mountaineers from Russia, Uzbekistan, Ukraine, Iran, Germany, Austria, Turkey and France “hit the big time” at Peak Lenin.

Another interesting trend to mention is: this year interest to Peak Lenin with Russian and Ukrainian mountaineers has considerably grown. In the past, out of all participants only 10% were Russian-speakers the rest 90% being mountaineers from Western Europe. In 2007, the percentage has practically equalised: 50 - 50, and, to all appearances, Russian one will keep growing year on year, which is good. And, undoubtedly, most outstanding event, overshadowing the rest of the season’s peculiar events, is landing of biplane on the Edelweiss Glade. Enough to say that planes last landed there at Peak Lenin back in 1930s when Russian Soviet pilot Lipkin has made an emergency landing on the slopes of Peak Lenin. Ever since only helicopters flew in the area but never ever a single biplane! With a sinking heart, we were watching the plane’s virtuosic manoeuvring on landing and taking off. Three-four times past, the pilot seem to have mastered the stone-sown “runway”. It has been high-class and, softly speaking, absolutely bold and fearless action by pilot who had flown the “mastodon” plane of the Soviet times!

“Summer is kind of a small life” - as a Russian bard sang. This expression to a greater extent matches with the Pamir’s summer life. The short period of time spent there amidst grand, majestic mountains away off the rest of the world makes a person feel one’s life better and deeper, brings friends closer to or, conversely, far off each other. Every time the “small life” fetches different results. But what stays unchanged is a feeling that you must and will come back here again, because you want to.

Photos of the «Ascension on Lenin Peak» tour: 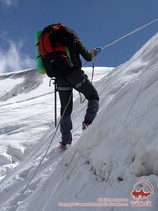 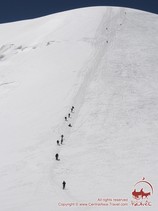 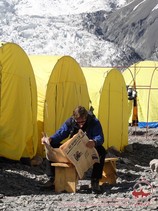 see all photos of Lenin peak »»

Videos of the Lenin Peak tour:
Video about Lenin Peak, video about Base camps, video of ascension on Lenin Peak.