A house that is always with you 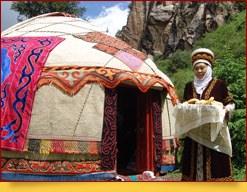 It is known that the Kyrgyz ancestors were nomadic people. In the culture and lifestyle of the modern Kyrgyz, the influence of their nomadic past still can be traced. For many centuries they had been moving from one place to another in the endless expanses of Siberia, raising cattle, mainly horses. Being excellent riders, they constantly fought with numerous enemies but eventually left Siberia and migrated to the mountains of Tian Shan, where they found refuge.

The Kyrgyz nomads were strong people of iron will. They were true warriors, whose hearts had been hardened by endless military campaigns and harsh life. But still, like sedentary people, they needed a safe place that could protect them from bad weather and provide their families with warmth and comfort. It was necessary to have a house to receive guests, to have a wedding party or to pay last respects to the beloved one who passed away. A kyrgyz typical house was a yurt and had great advantages: it was portable and always at hand, wherever they went.  An interesting fact is that the word yurt "jurt" in the Turkic languages means "tribal land." In the kyrgyz language, it was also rather common for the designation of a house to use the concept of "Ota-jurt" - "father's land" or "homeland". 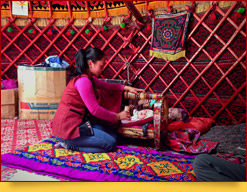 That is, for any kyrgyz nomad the place where his yurt was installed meant his   homeland: his house and his homeland were always with him.

A yurt has surprising functionality and simplicity, designed to be easily dismantled and not to be heavy weighted. A traditional kyrgyz yurt used to be built without a single nail, from materials that were at hand. The willow, flexible and durable, was used for the round structure of the yurt. Apparently, nomads were good at mathematics and physics, if they had chosen circular shape for their yurt: a round construction has a higher capacity and can better withstand the winds than rectangular one. The yurt’s structure was based on four elements: a round lattice hole in the roof "tunduk", folding lattice walls "kerege", flexible poles "uuki" and a double-leaf door "esik". The "Kerege" was assembled from rakes, which were fastened with straps made of calf or camel leather featured by its special strength and elasticity. The “tunduk” was a lattice wheel covered with a koshma rug (100% wool felt), which could be easily pushed back to provide the yurt with fresh air and light. 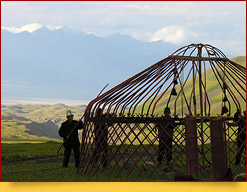 "Uuki" were inserted in special sockets in the "kerege", they connected the “kerege" and the "tunduk” forming a dome. Interestingly, it is the curved form of "uuki" that distinguishes a kyrgyz yurt from a typical yurt in Altai, in Mongolia and in Tibet.

To fix the individual elements of the construction, woven leather straps were used; they surrounded the yurt and also served as its decoration.  The ideal material chosen by the kyrgyz nomads to cover the yurt walls and roof was koshma.  Koshma is made of camel or sheep wool. It is not affected by cold or heat, moisture does not penetrate through it and parasites cannot breed in this material. Koshma also was used as the yurt´s floor covering.

The family of a common nomad usually lived in a yurt "boz yu" of  5-6 "kanat" (sections of "kerege"). The construction of such yurt required 80 to 100 "uuki" poles.  When the family moved to another place, it usually took 30 to 40 minutes to disassemble it. 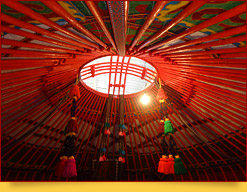 A typical kyrgyz yurt weighed about 400 kg, for transporting it was packed and loaded on two horses or one camel that carried it to the new destination. It was traditionally considered that yurt´s installation was a female duty.  Several women spent from one hour to two hours to place a yurt, male help was required only for lifting the tunduk.

Richer nomads could afford to dwell in a yurt of more than 100 uuki.  However, only the most prominent nobles used to live in large yurts of 360 uuki.  To install a yurt rich families involved their poorer relatives and neighbours, who helped them not only to assemble this portable house but also to decorate it. The richer nomad was, the more attention he paid to the interior decoration and exterior design of his yurt. For internal decoration ornamental straps and ropes, made of wool with addition of horsehair, were used. Fine koshma carpets with interwoven coloured ornaments were put over rough koshma covering the floor.  Carpets with red or black appliqués were used for exterior decoration. 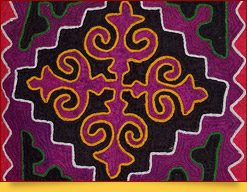 By the way, it is particularities of decorative ornament that give the national flavour to a typical kyrgyz yurt and distinguish it from any other.

So what is a kyrgyz yurt? Why have people not refused to use them in our modern era? The answer is quite obvious. For any Kyrgyz, a yurt is more than a nomad house; it is a kind of temple, where he can feel an invisible link between generations: past, present and future. The place where any traveller is welcome, but no one is allowed to enter with weapons. Here the hosts always offer for guests the best seat  in front of the triangular hearth "talga”  and a cup of fragrant koumiss or green tea so they  can rest and admire the gorgeous beauty of the Tian Shan mountains in comfort. Thus, anybody who stays in a yurt  will surely feel like a true nomad and experience an unprecedented connection with nature, urging him to new adventures.