"Do not show your own mother to your father without jewelry ..."
The Uzbek proverb. 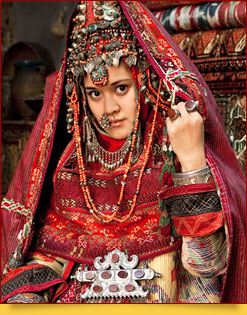 Long time ago women living on Uzbek land believed that necklaces and earrings could change their lives. Thus they wore them then not only the usual body parts. There was jewelry to be worn on the back and even under the armpits. The last ones were called "kultic tumor". They had a form of a small handbag, whose "handle" was to fit tightly to the body. All this of course was worn for a reason.

The history of adornments began long before people began to make it of precious metals. With time silver, gold and gems became the best choice to show elegance and beauty. Traditional Uzbek jewelry could tell a life story of its mistress.  Price and complexity estimated wealth, colors and details - marital status. The younger was the girl, the brighter and more elegant her jewelry attire was. Amulets and charms, rings and pendants, necklaces and bracelets of various shapes and sizes were also endowed with the ability to drive away the fearful evil spirits.

Glorious and shining was bridal attire, where each detail symbolized something. The maximum weight worn by a girl of those times reached 10 kg. A young wife was to wear charms from the wedding day until childbirth.

Generally masterpieces of zargars (jewelry masters) were made of silver. Myth tells this metal deprives any poison, casts away evil, and guards purity of spirit and body. It was often combined with rubies, emeralds and sapphires. Semiprecious stones, like pearls, turquoise, jasper and corals were also popular. Gold was often a second choice.  It was a headgear "tillya-kosh" ("crown of the bride") made of gold or gilding. Resembling a large Russian kokoshnik, it was richly incrusted with colorful stones and fashioned pendants. Later Uzbek masters began to create diadems - "usma-tilla". They repeated the shape of the eyebrows and were also inlaid with semiprecious and precious gems. Then both forms combined into one. It became a voluminous kokoshnik, the lower part of which repeated the features of the girl's face. 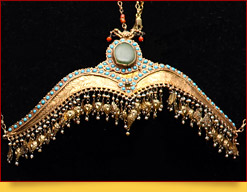 Jewelers’ fantasy was boundless. For example the ancient Bukhara headdresses "shashpo", which was worn over the main headgear, and was often accompanied by long silver threads with coral and pearl beads and silk tassels ending with metal caps. All this was wrapped around the headgear. The ends of the threads framed the face and hung down along the cheeks.

There was something that united the girls of all regions. Essential part of any women's costume was called "choppukuk". These were braid pendants - brushes of black silk inserted with silver or gilding. Uzbek women also adored necklaces of coral bunch - "mardzhon” – these were beaded threads intertwined with chains. Firstly, zargars made separate fragments, and then assembled them. Combination of corals with coins (coral monisto) considered particularly elegant. The peak of sophistication and excellence was a massive medallion "zebiguardon" with patterns and precious stones. It was the center of necklace.

The breast jewels "haikal" ("figure") originated from an ancient custom to wear images of different animals to show the mascots - patrons of the clan.  Haikal was made of incrusted silver plates connected by several rows of chains. Its central part depicted the clan animal and had different shapes and sizes. 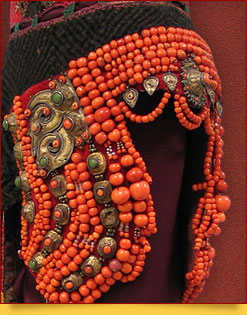 Another amazing piece of Uzbek jewelry art was an amulet case "tumor". They come in a variety of geometric shapes: triangular, with a facing up vertex, rectangular, polygonal and cylindrical. Generally they held a protective prayer within. "Tumors" were made with special love, artisan applied the oldest kind of artistic metal processing - filigree. Tumors were attached to necklaces. Some preferred to wear them on simple chain. Women hid amulets, magic spells, and even notes from their beloved in these precious cases.

That day icons of style wore as much as two pairs of earrings at a time. The earrings were of a variety of shapes. From a thin silver ring with beads - "zirak" to golden petal-like earrings - "shibirmak" with large rubies in the center surrounded by pearls. The manufacture of women's rings and earrings considered to be almost a different profession, so artisans got a special training. Master who made earrings were called  "ziraksoz", and  professional ring-makers  - "uzukzoz". By the way, some women in the East still wear rings in all the fingers, except for the third. It is believed that the ring on the middle finger is a symbol of loneliness.

Magic symbolism was in every stone put in the jewelry. Carnelian – “hakik” was held in special reverence. People believed it brings happiness and health, saves from danger and helps to unravel lies. Thus almost all the ancient bracelets and rings are incrusted with carnelian. Endowed with a healing power, pearl was also popular.

All the myths, beliefs and signs along with the secrets and subtleties of technique and decoration of stones and precious metals were passed from generation to generation. Talented masters were highly respected as there were quite a few of them. Nevertheless massive bracelets, all kinds of rings and earrings, pendants and necklaces have always been invariable part of every apparel, even the humble one.