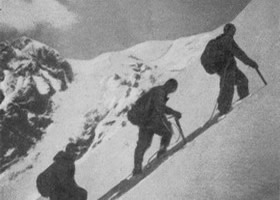 Mother Nature is good to Kyrgyzstan richly endowing it with wonderful mountainous views and sceneries. Two imposing 7000 m - high peaks of the Northern Tian Shan - the Khan Tengri Peak and the Pobeda Peak – are objects of mountaineering that any mountaineer dreams of. The history of discovery and conquer of the two peaks still stirs up the minds of new explorers.
Ancient peoples already had general knowledge of the Celestial Mountains. To that fact Chinese sources as well as Byzantium missionaries testify to. Still by the middle of the 19th century AD geographic knowledge of Tian Shan was close to zero – due to remoteness and inaccessibility of the area. Only at the beginning of the 20th century AD the German geographer G. Merzbakher, as a result of his 1902-1903 and 1907-1908 expeditions, has managed for the first time to compile a precise map of the Tengri Tag Ridge with the Khan Tengri Peak on the map marked as “highest” point of the region. 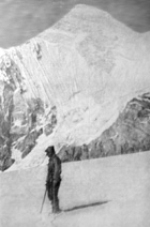 Early in the morning, when the Sun lights up the surrounding mountains the human eyes automatically are caught up with the gold-lit Khan Tengri Peak and a beholder cannot stop gazing and enjoying the enchanting sight. In this respect the Pobeda Peak is substantially losing to the “handsome king” - Khan Tengri Peak. For centuries, nobody could even notice the Pobeda Peak: at a distance, at least from the northern direction, the peak cannot be seen and has always been difficult to get closer to. To get Pobeda seen in its full might and appearance, one has to climb to a good vantage point, for instance, to the top of the Khan Tengri Peak, provided the weather is good enough.
Only in 1937 the Soviet expedition headed by academician A. Letavet had, at last, reached the Kuylu Ridge and discovered a never-seen seven thousand-odd meters high peak. In 1938 three members of the A. Letavet’s expedition – L.Gutman, Y. Ivanov and A.Sidorenko – had succeeded to the top despite unfavourable weather conditions. The mountaineers ascended through thick mist and had no possibility to properly locate themselves against surrounding peaks. In fact, they poorly understood what particular peak they got to.

They have named the peak as “Dvadsat Let Komsomolah” (the Komsomol’s XX Anniversary Peak”). Then during the World War II, in 1943 other expedition – the topographic expedition led by P.Rapasov – was working in the area. When studying the expedition materials in early 1944, they have mapped a new 7,439m-high peak and, having no doubt that the peak has never been climbed, named it as “Pik Vojennyh Topographov” (The Military Topographer’s Peak). It was then when the USSR has found itself possessing in the Kokshaal-Tau Ridge, though in parity with China, world’s northernmost more then seven thousand meters high peak. In 1946, in honour of the victory in the Great Patriotic War 1941-1945 the peak was renamed into Pobeda Peak.
By that time Khan Tengri Peak has already been successfully climbed for three times. In 1931 the expedition led by M.Pogrebetsky had reached to the top. In 1936 two expeditions – Kazakh mountaineers Y.Kolokolnikov, I.Tutunikov and L.Kabardin and Russian ascenders including the renowned Abalakov brothers had independently stepped upon the legendary top. 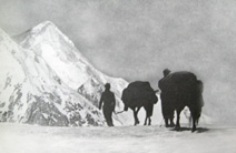 To the major extent, the history of conquering of the Pobeda Peak is tragic. Only in 1956 after multiple unsuccessful attempts and human sacrifices the summit subdued to V. Abalakov who, by comparing photos, has proved it to be true that the Komsomol’s XX Anniversary Peak, the Military Topographer’s Peak and the Pobeda Peak is one and the same peak.
For the time being, there are 11 known mountaineering routes to the top of the Khan Tengri Peak and 9 routes to the Pobeda Peak, largely leading to the top from the north. Times have changed. If originally explorers and climbers losing a lot of time had to caravan to the area of the Inylchek base camp then today every traveller can enjoy astonishing views of the greatest summits just having had a half-an-hour helicopter hop!