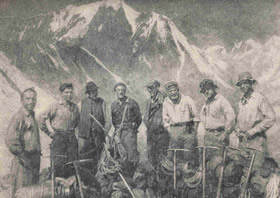 In 1933 the Soviet Academy of Science organized the large Tajik-Pamir Expedition where 215 members on the scientific side were accompanied by nearly 400 assistants workers, porters etc. Both the scientific and the sporting goals were fulfilled by the expedition. On 24th July having reached the Bivachniy glacier, the group of mountaineers started their way to the top. On 30th July N. Nikolaev, the member of mountaineering group, dies of the fall from the rock. In some days after D.Iralle, the porter also dies of pneumonia. But in spite of that the ascent was carried on. 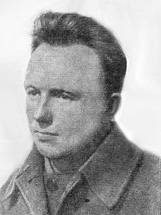 On 22nd August six mountaineers headed by A.Gorbunov went out of the base camp for final storm of the summit. Three mountaineers had quit the ascent at the point 6,900 m as they had no more strength to carry on. The other three - N. Gorbunov, E. Abalakov and A. Chetye - continued to ascend. On 01st September snow tempest began. The tempest continued for several days. A. Chetye got ill. Food went short. For 2 persons the mountaineers only had a can of meat and a bar of chocolate to share. On 03rd September the weather turns better and A. Gorbunov and E.Abalakov decided to make a final attempt to the top. At the altitude 7,380 m N. Gorbunov had found he couldn"t get any further as he got his feet heavily frostbitten. Abalakov continued to ascend solo. He managed to reach the top and even to put up a tur (cairn). Then he descended to Nikolay Gorbunov and they carried on jointly until caught up with Chetye to continue downhill to the base camp.