Termez archeological museum is located in Termez city on At-Termeziy road and was formed on 24 October 2001; starting from 2 April 2002 in honor of 2500 anniversary of Termez the doors of museum are open for all.

Museum is reach with archeological findings: ancient coins, items of painting, sculptures, objects of life and etc. The total sum of 27000 priceless treasures of history! There fifteen staffs are working in scientific-educational department, who make excursions in Russian, Tajic, Persian, and English languages. 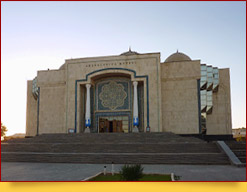 This unique, single in some sort, specialized museum consists of entrance hall, and nine major halls. The Museum “cuts” historical level, starting from 100 thousand years BC, ending with the beginning of XX c, and familiarizes us with the evolution of spiritual and applied development of a mankind. The entrance hall immediately strikes imagination- unique statues from plaster and stone, stone pool and high humas (ceramic vessels), belonging to different historical epochs, are ravishing by the mastery of performance. Here as well there is the relief map of Surkhan Darya region, where 20 archeological monuments are marked. Nine halls introduce us the following history levels.

Hall 1. Surkhandarya oasis in Stone Age (100-3 thousand years BC.)
Grottoes and caves of Baysuntau and Kugitanga were dwelling for primitive people. And the cave of Teshiktash is considered the most ancient stand of Neanderthal men - it was an event of world value! Here stone cutters were found, scraped, peaked blades for handling of wood and skins. The found bones of animals say that people of that time were doing, basically, hunting. In mesolite (12-5 thousand years BC) people invented a bow and arrows, used small stone tools, and cultivated animals.

Hall 2. Surkhandarya oasis in bronze epoch. (3-1 thousand years BC.)
This time is characterized by improvement of instruments of labour (bronze), the potter's wheel invention, separation of craft from agriculture, occurrence of "rudiments" of an artificial irrigation. Earliest of the studied monuments is Sapallitepa on the bank river Ulanbulaksay. Here there was a settlement Dzharkutan, with more than 100 hectares area. This monument represents a prototype of the city civilisation on the territory of Uzbekistan. Fire temple is considered the most ancient construction. People here were able to make mirrors (melting of copper), vessels for cosmetics, and necklaces from rocks, clay figurines-idols and so forth. 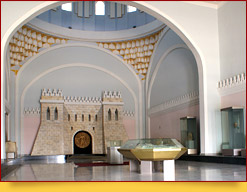 Hall 3. Culture of Ancient Baktriya (beginning of 1 millenium. BC. - IV c. BC.)
Wide application of iron instruments of labor beneficently affected the agriculture and craft development. Cities are formed as following: Dzhandavlyat-tepa, Haitabad, Kyzyl-tepa had a citadel where the administration and inhabitants lived, and an internal city where handicraftsmen and potters worked. The three bladed tips of arrows, sickles from stone and iron in the shape of half moon became the samples of the steel craft art. Unfortunately, the basic part of monuments was destroyed because of Alexander the Great campaigns.

Hall 4. Culture of the Northern Bakrtriya during the period of governing of Alexander the Great and Elinistic states (329 y BC. - mid.II c. BC.)
The government of Greek- Baktrian kings leads to the formation of the site of ancient settlement Old Termez and “animates” all the spheres of life in this region. Indian and Elinistic cultures gave a very productive impact on the spirituality development of people. Were found coins, the chasing of which tells about the highest level of mastery, pieces of painting and sculptures tell us about this. Terracotta statuettes start to appear, carved from elephant bone, which strike with their elegance. Stone carving and glassblowing are getting improved.

Hall 5. Culture of the Northern Baktritya in Kushan epoch. (I c.BC. - III c AD.)
During reign of Kanishka I (the king of Kushan) the Northern India and the lands of Eastern Turkestan were included into the state structure, that was strongly reflected in the culture of that time. Kushan cities now not simply administrative and economic, but also the religious centers (Karatepa, Fayaztepa, Dalverzintepa etc). At this time the performance of the Great Silk Road develops completely. Archeologists in considerable quantities found the terracotta statuettes of religious value. 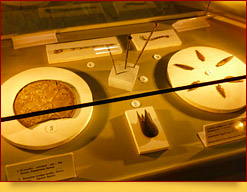 Hall 6. The Northern Toharistan in the early Middle Ages (IV-VIII cc. AD)
The cities of Toharistan consisted, basically, from two parts: citadel and shahristan. In the citadel there was the ruler’s palace and the constructions connected with it. Town-planning is distinguished by complicated architectonic motives - dome-shaped roofs, arches from airbrick. Cities of this time execute the function of religious centers; there were discovered numerous Buddhist sanctuaries. Different glass vessels found on these monuments, metal vial for antimony paint for eyebrows and eyelashes), necklace, made of mountain minerals, mug with two handles and ceramic vessels made as imitation of metal, testify that the handicrafts of the North-West Toharistan were rapidly developing in the early Middle Ages.

Hall 8. Culture of Termez and Chaginian at the epoch of Amir Temur and the Temurids (1370 - beginning of XVIc.)
Armour of warriors, colorful lyagans (dishes) which are not worse than the Chinese porcelain, jugs, lamps, sets of chessmen, fragments of architectonic scenery - the great legacy of the Temuruds epoch confirms that the applied arts of Termez and Chaganian were on the top-level.

Hall 9. Surkhandarya oasis in the epoch of Khanates (XVI - beginning of XX c)
Termez is a constituent part Bukhara emirate. Salavat (Salihabad) village, dependent on Termez, becomes the residence of the governor; here there is a market, medrese (school) and the most beautiful mosque. On the territory of Surhan oasis they build bridges, caravansaries, fortresses. Baysun, Denau and Sherabad producing cashins (tile), labor instruments, the metal and stone weapon, jewels, vessels made of clay and metal, become the handicrafts centers. And, now at colorings of the vessels colors of the cold spectrum are prevailing.