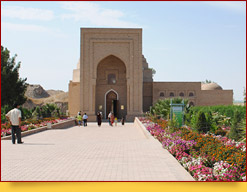 On high shore of Amu Darya, on the South-West of the site of ancient settlement Old Termez one can see blue domes of restored nowadays one Sufi order sheikh burial vault. This architectonic monument is the mausoleum of the «wise man from Termez» - Hakim at-Termezi, whose full name is Abu Abdulloh ibn Hasan ibn Bashir. He was the great theorist of Islamic Sufism, the outstanding scientist and the dervish order founder.

At-Termezi was born in 824 in the kishlak (village) of Bus, which is near Termez. The legend says that when he was at the age of ten, the wonderful old man appeared in front of him, and blest the boy on Koran studying, as well as on life studying, deeds of Prophet Mohammed and expounding his statements. Under the influence of old man revelations young at-Termezi selects the course of life.

Being young at-Termezi accomplishes hajj to Mecca and after stays to live in Arabia, becoming a pupil and a follower of the connoisseur of hadisas (the sentences and deeds of Prophet Muhammad) al-Buhari. Being the person with irregular ideation, at-Termezi reconsiders Koran expositions and hadisas, thereby having opened a new view on the essence of belief in Allah and Prophet. The new vision is set forth by him in the most known of his works «Big assembly» where it is narrated about private life, character and even Muhammad's appearance. In the works at-Termezi argues the sense of Muslim ceremonials, preaches love to the knowledge of truth, tells about Sufism. 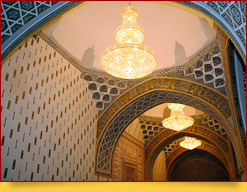 At- Termezi lived a long life, having devoted himself to the truth, and died at the age of 112. He was buried in the yard of hanaka (Sufis dwelling place). It was erected in XI c on the place of demolished Buddhist temple. The underground hujra (cell) was the place of living for at-Termezi, place of praying and communication with pupils. In XI c over the grave of the wise man, there was erected the mausoleum, close to it there is chillyahona (a place for solitude for the time of fasting and praying). First, the mausoleum was representing ascetic enough construction, with decorated by different carved clay dome. At the time of Temurids there was erected new burial volt, with the masterpiece of stone carving - the monumental headstone of white marble.

For 2500 anniversary of Termez in 2001, the appearance of mausoleum was completely restored in fact, that symbolizes the renaissance of Islamic values. Hakim-at Termeziy is considered to be protector of this city now, and his mausoleum became a shrine for Muslims all over the world.