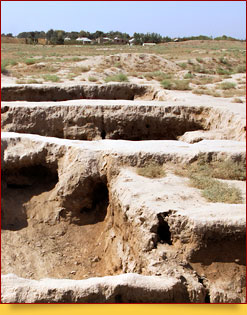 Dalverzintepe is an object of steadfast attention not for nothing. This surprising place draws scientists by revealing the set of secrets of history course. An inquisitive person will be tempted by Dalverzintepe with a surprising finding - a treasure of gold things in weight of 36 kg, consisting of rings, necklaces, etc.,  that speaks about undoubtedly high skills of jewellers of that time. People with the developed spirituality will be brought here by a world famous Buddhist sanctuary. Romanticists will be interested by love and insidiousness legend. But all should be in sequence.

Dalverzintepe is located in the district of Shurchin of Surkhan Darya area, which is in 60 km to the North from Termez. Researches of scientists allow to define the time of site of ancient settlement blossoming - an epoch of Kushan kingdom (I c BC - VI-V cc AD). It was confirmed by archeologist L.I.Albaum in 30th of XX century, by the finding during excavation of ancient coins and the small fragments of ceramics of Kushan epoch. Archaeological expedition in 1959-1960 proved that Dalverzintepe during antique time was really the cultural centre. Farming with the help of irrigation was already practiced at that time, and the civilisation of a city type was formed, which is connected to the joining of Bactria to Ahemenids. During this period Dalverzintepe was the life centre of local administration, the nobility and the military units which were collecting taxes and responsible for the order in the city and on the border. War hikes of Alexander the Great also rendered a great influence on the city urban growth. The full decline is connected to the city conquest by the Arabs, in this connection it will be rather interesting to get to know one legend. 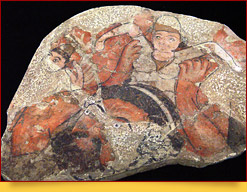 So, Dalverzintepe is blooming in all the aspects under the wise government of King Dal- the great wizard, and that’s why of course pagan. And he had the only pagan- beauty daughter. At that time there was galloping through the valley of Surkhan Darya, with the aim to turn unfaithful people into the fold of Islam, prophet Ali, the nephew of Muhammad, with the army of Arabs. And was the beautiful youth turning the unfaithful people into Islam on the left and on the right, came the turn of the city of King Dal- Dalverzine. But there is a barrier on the way - the ditch full of water, and there is no way to shut down this water in it. But was Ali clever and insidious. He got to know about beautiful daughter of the king and arranged the tightrope walking show opposite her windows - he started walking on the ropes here and there. “But the scoundrel is nice!”- said the princess. Ali realized that it is as good as done, and arrow with the note fell into the window of the maiden - and ardent faithfulness and love confessions in it. The princess didn’t have a bow, so she had to throw a pomegranate into beloved, on which she wrote the same ardent words with her soft hand. And it started: arrow - pomegranate.

Once Ali asked her: «What is there about this ditch? I’m very interested in hydromechanics”. And got the response: “Oh, my beloved! There and there, there is a whirlpool, the water from it goes into subsoil layer, shut it down, and water will stop coming. So you are sending matchmakers, are not you?”. So the young prophet used the information and closed the water, and captured the city.  But then saw- only sheeps and goats live in the city. And he understood that King Dal used his pagan powers- turned everyone into animals. Having logically thought, Ali decided that the biggest animal is the king himself, and ordered to kill all big animals. But the king turned into small dog and fled away from enemy to Guzar. And the princess remained a maiden; it is not nice to appear in front of the bridegroom as a sheep. When she saw the prophet, she looked in his eyes and jumped into his open arms.

“What is that Guzar?” - was the question of bridegroom.

“Rush surrounded village. Good to arson, so that my brave young man could easier reach it!” was the answer.

Ali did use the advice and turned everyone in to Islam. And as for princes, he cut her head in addition, if she betrayed her father, definitely she would betray him as well. And people shun coming back to Dalverzin, and city got abandoned.

At nowadays Dalverzintepe represents next: on the South - Vishgorod - the very high point of it, surrounded by ditch, where were found ceramic stoves, small temple, and winery. On the North - rectangle shaped constructions. In the country- Buddhist temple, full of Buddha stattuete, genius, devats, Bodhistats. Notable, that the site of ancient settlement Dalverzintepe is considered to be the most ancient Buddhist construction on the territory of Uzbekistan. On the North-East - Muslim cemetery, on the North-West- the temple of Baktra’s goddess.

The arts monuments, found during the excavations- sculptures, jewel items, painting, statuettes of musicians- vividly tell about the high people culture of that times. Thus, famous terracotta statuette of musician introduce us Baktra harp in hands, which is the instrument of “sky music”.