Even if you visit Tashkent for the first time, you cannot fail to notice it - the tower is visible almost from any point within the city. The Tashkent Television Tower (375 m in height) is the second tallest structure and the tallest TV tower in Central Asia. In Tashkent it totally dominates the area. 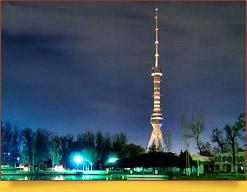 The Tashkent TV Tower’s basic function is radio and TV broadcasting. The broadcasting centre has been operating for over 20 years and is the largest in Central Asia. The centre is provided with telecommunication and production equipment from leading manufacturers from all over the world. More than a hundred highly qualified specialists are responsible for round-the-clock television and radio broadcasting in the city of Tashkent, Tashkent and Syrdarya provinces and a part of Kazakhstan.

However, TV and radio broadcasting is not the only function of the Tashkent Tower. It boasts a special observation deck at a height of 94 m providing the best panorama of Tashkent and presenting a perfect bird’s-eye view of the city. Besides, you can visit the rotating Koinot Restaurant with two rooms, with the Red Room at a height of 104 m specialising in European food and the Blue Room at 98 m offering its customers oriental cuisine. The floors in both rooms are rotating platforms making one full turn for one hour, so that the visitors (120 seats in the two rooms) can enjoy a 360-degree panorama of the Uzbek capital during a dinner. 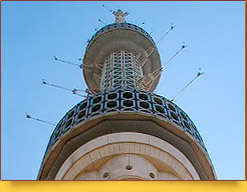 The construction of the TV tower in Tashkent was launched in 1978, and in 1985 the structure was put into operation to become the world’s fourth tallest functioning television tower at the time. In CIS countries the tower in Tashkent occupies the third position after Ostankino (Moscow, 540 m) and the Kiev TV Tower (Kiev, 385 m). In 1991 the tower in the capital of Uzbekistan was included in the World Federation of Great Towers, so in its foyer you can find a museum with a collection of the world’s tallest and most extraordinary television towers.

Structurally, the Tashkent Television Tower consists of three basic elements: a central trunk, latticework frame and tripod. It was built taking into account the relatively high seismicity of the region and can resist an earthquake with a magnitude of 0.9. The structure’s stability is based on three conic supports, each 93 m high.

Tashkent TV tower is one of the most attractive places of interest for both locals and international tourists. The visitors can register for an excursion where they will be told a detailed story about the tower’s construction, as well as about other city attractions which are so easy to see from the observation deck. At the foot of the structure there is the famous Aquapark and the Tashkentland amusement park - favorite recreation places for adults and children. 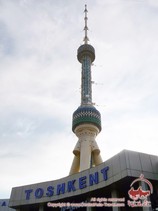 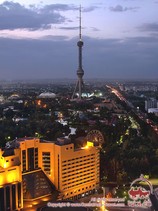