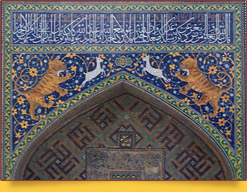 In Samarkand in the 14th - 15th c there lived an outstanding and very respected man named Hajji Ahar (Ubaydullah al-Ahrari). He was the spiritual thinker of the major branches of the Sufi spiritual order Naqshbandi: Central Asian, Western Turkish and Indian.

Many rulers in those times considered Hajji Ahrar their spiritual mentor; he was very much respected and honored by the greats. Thanks to him very high and unfair taxes were once lifted in Ma Wara' un-Nahr (known as Transoxiana in the West), the historical region between the Amudarya and Syrdarya rivers. They say he could prevent a cruel and bloody war between Ferghana, Tashkent and Samarkand.

Hajji Ahrar lived a long life and died at the age of 86. He had lived promoting the slogan ‘political power must be used to properly carry out one’s spiritual mission in the world’. Jami, the famous scholar and writer of the time, wrote about him: ‘Hajji of the hajjis is a man who knows the essence of things. People knelt before his sainthood, appearance and spiritual power’. 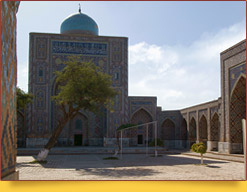 Hajji Ahrar was buried in Samarkand suburbs, and his grave immediately became an Islamic shrine. They put a large white marble tombstone on the grave, with a lot of epitaphs in Arabic.

In the 17th с the Samarkand ruler Nadir Divan-Beghi ordered that a madrasah and a mosque be built at Hajji Ahrar tomb. People called the madrasah ‘Sher-Dor Mirror’ because it very closely resembled Sher-Dor Madrasah in the Registan Square in Samarkand, which had been built earlier.

Unfortunately, the original beauty and uniqueness of Hajji Ahrar Ensemble does not survive because of many earthquakes. Almost all the facings have gone off, and the upper part of the madrasah has leaned forward. That was why early in the 20th c they decided to reconstruct the ensemble. The upper part was dismantled, and they made a reinforcement from modern bricks. 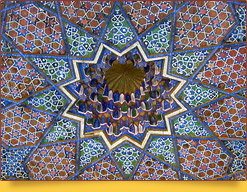 When it came to the restoration of the façade, the masters faced a serious problem: the facing was gone, and nobody knew what the original decoration had been there. Here helped the work by the Samarkand scholar Abdutohirhajji Samaria describing the Hajji Ahrar Madrasah, calling it Sher Dori Berun, with the word berun meaning ‘outside (the city)’. At the same time they found a few photographs of the madrasah in the Hermitage, S.-Petersburg, taken in the second half of the 19th c before the destructive earthquake struck. Their quality was far from good but a close examination of them proved that the façade images on Sher-Dor Madrasah and Hajji Ahrar Madrasah were almost the same. However, there were differences: for example, Hajji Ahrar Madrasah had a floral pattern where Sher-Dor had the sun with deer and tigers. While studying the photographs, they made another important discovery: over the door of one of the niches there was an inscription in Arabic - the name of one of Hajji Ahrar Madrasah  master craftsmen. It led to the thought that both madrasahs may have been built under the direction of the same usto ‘master’ Abduljabbar.

Today Hajji Ahrar Ensemble consists of a madrasah, summer and winter mosques, a minaret and an iwan. Just like many years ago pilgrims and other visitors come to Hajji Ahrar grave to pray in silence, try to find the answers and reach peace of mind.