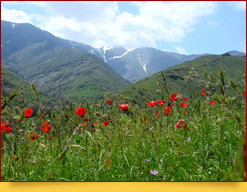 The Nuratau Mountains (Nurata Mountains) is the name for a ragged area consisting of three relatively low rocky ranges (Nuratau, Aktau and Karatau), the spurs of the Pamir-Alai. The territory is named so after its principal range, Nuratau, with its highest point, Khayat Bashi Peak (2,169 m), dominating the entire region.

The Nuratau Mountains are situated north-west of Samarkand and stretch for about 170 km from south-east to north-west. The Kyzylkum Desert begins 3-5 km from the northern slopes of the mountains. 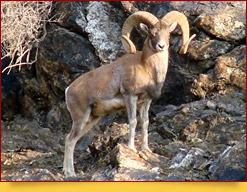 The Nurata Reserve is situated on the northern slopes of the Nuratau Range, at elevations between 530 m and 2,169 m above sea level. The reserve was founded in 1975 to conserve Severtsov’s argali population and a rare variety of walnut.

There you can encounter some rare representatives of flora and fauna, including Severtsov’s argali (a rare endemic subspecies of argali inhabiting the Kyzylkum desert), golden eagle, bearded vulture and black vulture included in the Red Book.

The valleys of the Nuratau Reserve are picturesque green oases covered completely with a solid mass of forest consisting of walnut, mulberry, pistachio, almond, apricot, cherry, plum, pear, apple and other tree types. In total, 41 of the plant species growing in the Nuratau Mountains are included in the Red Book of Uzbekistan, with 32 floral species endemic to the country.

The proximity of the Kyzylkum desert makes the climate in the reserve area continental, dry and warm. 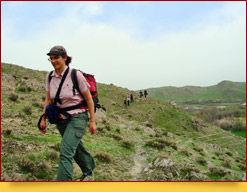 To see unique landscapes and rare animals and plants; to observe the life of people with a different culture; to find oneself in an unusual atmosphere and to feel people’ life flowing steadily in harmony with the environment – this is what attracts so many tourists to the region.

There are a few unique mountain villages, such as Khayat, Ukhum, Sentyab, Ashraf, Majerum and some others, hidden deep in the valleys of the Nuratau Mountains, where people are eager to see tourists in their guest houses having in them everything for comfortable accommodation.

You cannot see anywhere else, either in Samarkand, Bukhara or any other place, the handmade souvenirs such as local people sell. If desired, tourists can take part in spinning, weaving and finalising felt carpets.

Furthermore, you can visit an ancient watermill and silk production farm and acquaint yourselves with a master in traditional musical instruments.

The best seasons to visit the area are spring and autumn, when it is time to play traditional games. Kup kary, a competition between horsemen for a carcass of a goat, is particularly popular and is organised for special events.

Places to visit and top sights in Nuratau Mountains

The Majerum Juniper, a grandiose natural monument, a sacred tree aged at least 1,500 years, has astonishing dimensions: its trunk is 24 m round at the base, while its largest branches reach 12 m in circumference.

Local people care for and defend their treasure, with a legend about the appearance and miraculous properties of the tree passed from generation to generation. They believe that the juniper was planted by Alexander the Great himself and that it is able to cure women’s infertility.

The ruins of a fortress can be found not far from the giant juniper. Local people regard this structure as a source of power.

Majerum Kala is the name for ruins of a small fortress, which is one of the most ancient archaeological monuments in the Nuratau Mountains. The fortress is situated on the top of an oval hill. The area around the fortress contains some remains of small houses.

The Ukhum fortress is an archaeological monument on the top of a high hill near a point where the Ukhumsay and Khayatsay Rivers merge. It is actually a hill in the form of a truncated pyramid with remains of walls.

An ancient mosque which is still functioning can be seen on a steep rocky slope in the village of Ukhum.

The area abounds in highly picturesque landscapes: colourful walnut groves along the banks of mountain streams; rocky massifs inhabited by a great variety of bird species, including some rare raptors such as eagles and vultures; diverse and colourful grass carpets.

Remains of an old village and ruins of an ancient mosque can be found at the border of the Nuratau Reserve, near the village of Upper Khayat.

The rocky walls of the Kachak, Sayedan and Fargu gorges contain some petroglyphs.

An enclosure 8 ha in area where the rare animals are kept and bred was created to conserve Severtsov’s argali population. The territory is prohibited from entering, but the animals can be observed from the nearby slopes.

A small mountain lake at an elevation of 1,640 m can be reached via a pass under Mount Gaukum (1,516 m). There is a one-day trekking tour to the lake from the village of Sentyab.