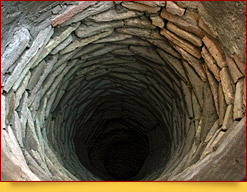 Khiva is one of the oldest Central Asian cities. It was founded in the 5th с BCE. There are a lot of Khiva origin legends. According to one of them, the city was founded by Shem, the biblical Noah’s son. It says that after the Deluge Shem wandered about the desert, lay down to rest and dreamt about seeing 300 blazing torches. He believed it had been an omen and built a city in the form of a ship - as to the arrangement of the torches in the dream. Then Shem dug a well called Kheyvak, which was what the name of the city originated from.

Another legend says that the merchants traveling along the Great Silk Road, which connected the East and the West centuries and ran through Central Asia, used to stop at the well where Khiva is now for rest. They would drink the crystal clear water of the well and exclaim Khey Vakh! (‘How wonderful!’). So the locals named the well Kheyvak, and the settlement built around it later was named the same.

The well is still there, being carefully preserved in a snug yard at the northwestern Ichan-Kala wall. While the well was being repaired, they discovered the remains of a domed structure over it and some of the original brickwork.