Anush-Khan Bathhouse is located near Ak-Mosque; they laid its foundations in 1664. It is still surprising how sophisticated were its heating, water supply systems and sewerage. The bathhouse was used as vakf - property the profit from which was used for charity - of Ak-Mosque. 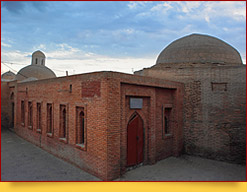 The medieval Oriental bathhouse had an entrance hall, change rooms and washing rooms. Ahush-Khan Bathhouse had this layout as well. It had a heating system under the floor and semi-basement compartments to keep warmth for a long time.

The bathhouse was built thanks to Abdulkazi-Khan. There is an interesting story about what made him build it. Abdulkazi-Khan was a happy father of nine boys, and yet, he very much wanted to have a daughter. When his tenth child was born, he was told a lie by saying it was a girl, and he named the child Anusha after his favorite concubine. Several years later Abdulkazi-Khan - who took part in many military campaigns - was captured by Bukhara emir. Abdulkazi-Khan’s sons did not try to save their father, except Anusha. Bukhara emir was surprised to see his captive’s daughter; he expected his sons to arrive. Anusha showed wit and proposed an agreement to the emir: if she could surprise him, he would release her father. The emir accepted it, intrigued - and Ahusha dropped her dress, showing a young man’s body. Surprised, the emir kept his word and let Abdulkazi-Khan go. When Abdulkazi-Khan returned home, he said, ‘It has turned out that I don’t have nine sons. I have only one son named Anush.’

In gratitude for his saved life and to honor his tenth son the khan ordered to build the healing Anush-Khan Bathhouse.