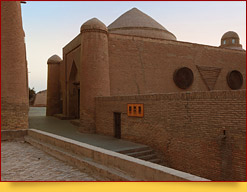 Built in 1832 - 1833 in the reign of Allakuli-Khan, this caravanserai resembles a madrasah. Only its main gateway differs from a madrasah’s - it leads to the yard directly. There are two stories of hudjra cells around the yard: the first was used for storing things, the second for stays in.

What made Allakuli-Khan decide to build such an advanced and comfortable structure? The densely populated left bank of the Amudarya River near Palvan-Darvoza Gate had good connection with the major roads, which made it the best place for trade. Khiva trade relations with Bukhara, Persia and Russia was flourishing then. That was why the khan decided to build a caravanserai there for foreign merchants to stay, store and sell their goods in. The building also had a special entrance for pack animals.

The caravanserai, however, had to be fit into Ichan-Kala, so they destroyed the part of the town wall at the palace and set the building with its side part in Ichan-Kala and its facade facing the bazaar square outside it. Later they attached a roofed bazaar to the facade entrance of the caravanserai. 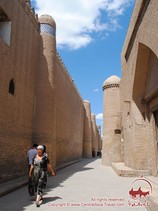