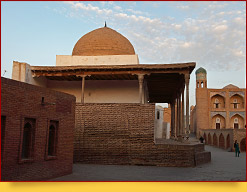 Neighborhood mosques in Khiva’s mahalla or guzar residential communities were common in the city. Aq Mosque, meaning ‘a white mosque’ in Uzbek, is a classical example of such a structure. As a part of an architectural ensemble, it is located near Ichan-Kala eastern gates in Khiva. The foundations of the mosque were laid near Anush-Khan Baths in 1657. However, the construction of the building was suspended till the mid-19th c, which the door inscriptions say. The doors also bear decorative and epigraphic carvings with the names of Khiva’s master wood carvers: Nur Muhammad, the son of Kalandar, and Kalandar, the son of Seyd Muhammad.

Aq Mosque features a minaret and a domed hall with three galleries and a mihrab semicircular niche in the wall that indicates the direction of Mecca. The minaret also has a dome with a spire on top. Around the hall run high iwan terraces with many wooden pillars. These pillars bear most beautiful carvings; they are the most attractive feature of the mosque. The windows have decorative lattices made of white gunch stucco. The name of the mosque indicates white gunch stucco decoration on its walls and, besides, its highest ranking among the rest small neighborhood mosques. Scholars believe the name also refers to the previous mosque, on the site, and on the remains, of which Aq Mosque is standing.