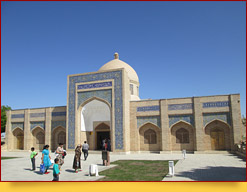 At a distance of 12 km from Bukhara there is a memorial complex of the Islamic saint Baha-ud-Din Naqshband (also spelled Bakhautdin Nakshbandi), the famous Asian philosopher and Sufi. The complex is a Muslim shrine where pilgrims from all the parts of the Islamic world come. Once the village Kasri Orifon was located at the site of the complex. It was famous for its pagan holidays and ancient customs…

Baha-ud-Din Naqshband lived in 1318 - 1389. He founded a Sufi order, which was later named Naqshbandi (also spelled Naqshbandiyyah, Naksibendi, Naksbandi, Nakshbandi) after him. His teachings became a polestar for many Asian people of the time and still remains topical today. The principle Baha-ud-Din Naqshband followed all his life is quite simple: ‘let the heart be with God and the hands be with work.’ It is also reflected in the symbol of the order - a heart with the word Allah inside. Baha-ud-Din Naqshband was the spiritual adviser of the great Tamerlane and taught him to be modest, decent and kind.

The famous Sufi made 32 hajj pilgrimages to Mecca, and today his mausoleum is also a Central Asian ‘Mecca’. They believe that if one walks to the mausoleum from Bukhara three times, it will equal one hajj. Believers from many Muslim countries got together at the site to pray, asking forgiveness for their sins and asking for fulfillment of their wishes. 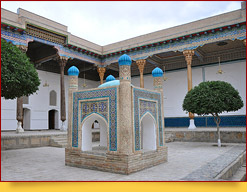 Abdulaziz-Khan ordered to build a sepulcher over the grave of the saint and other structures around it in 1544. The construction of complex lasted almost four centuries. The main building has a rectangular inner yard with the sheikh’s mausoleum and a mosque built in the 19th c. A little further there was an iwan (a rectangular hall or space, usually vaulted, walled on three sides, with one end entirely open) with wooden pillars where the Shaybanids mausoleum was. The major domed building is the khanaka (also spelled khanqah, khaniqah, khanqa, khaneqa, khanegah or khaneqah; khanaka is a Sufi hospice and monastery) of Abdulaziz-Khan.

In the 1980s the whole complex was thoroughly restored. It consists of a madrasah, a minaret and two mosques. In the inner yard with a hauz pool stands the mausoleum of the saint. There is a lying trunk of a mulberry tree, which is believed to have been grown from Baha-ud-Din Naqshband’s staff. They say that if one crawls under the trunk with a wish made, it will certainly be fulfilled. There is also a necropolis, including sepulchers and tombs of some members of some past ruling dynasties.

The complex has a museum where you can find a lot of information on Baha-ud-Din Naqshband, his order and Sufism. There are Sufi clothes, books, cauldrons they used for cooking and many other interesting exhibits in the museum.

Almost everyone who has visited the complex usually notes the unique feeling of serenity and harmony he or she enjoyed there.