The conquest of Central Asia by the Russian Empire brought about another significant stage in the development of the local architecture. Among the first notable structures of the new type was the palace of the emir Sayyid Abd-al-Ahad in the city of Kagan. 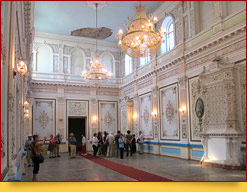 The Russian Empire tried to quickly connect its new lands with its center with modern trade roads. Building railroads was the best way to carry out this task at the time. Kagan was initially planned to be a village for railway employees, named New Bukhara. It was built as a service center of Zakaspiyskaya Railroad in 1888 at a distance of 16 km from Bukhara. Soon it became like an embassy town. Besides the railway employees’ homes, there was a special diplomatic office that was responsible for the relations between the Russian Empire and the Bukhara Emirate.

The construction of the palace designed by the famous architect Benois began by order of the emir on August 14, 1895. The leading master builders got down to work, and under the supervision of the engineer Dubrovin the construction was completed in 1898.

The building was of a principally new design, which made it different from all the major buildings of the time in the region. It was Moorish in style, in combination with baroque and empire styles, with a lot of pillars, towers and domes. It looked even more pompous than the emir’s palace in Bukhara. The European architectural elements of the Kagan palace were combined with Arabian ornaments. The walls of the palace had a lot of stucco decoration. 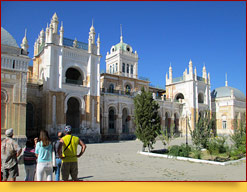 There are a few versions of what was the purpose of building the palace. According to one of them, the emir ordered to build it for himself personally. However, when he came to the palace and examined it, he said that it was not grand enough for him as an emir and too luxurious for him as a Muslim. According to another version, the palace was planned to be used during the visit of the Russian emperor to the Bukhara Emirate.

Whatever was the plan, the new Bukhara emir Alim-Khan who soon came to power made the palace a hotel for high ranking guests visiting Bukhara, which is another interesting fact about the site. The palace was the first VIP hotel and the first Eropean-style building in Bukhara oasis.

It is impossible to “check into” the palace today, since it is houses the local Railway Workers Culture Center. However, anyone who is interested in Bukhara architectural sites should visit Kagan palace. It still remains an example of the cultural interaction of the two powers in the late 19th c.