Chor-Minor Madrasah (‘madrasah of four minarets’) is located in the northeast of Bukhara. The four minarets of the madrasah symbolize the four cardinal points. 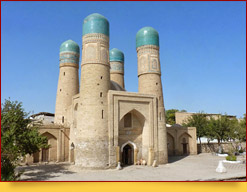 The madrasah features elegant and nontraditional shapes; it is not large and yet looks grand. It was built in 1807 at the instigation of a rich Turkmen merchant, a horse and carpet trader Caliph Niyazkul-Beg. According to historical records, after visiting The Taj Mahal in India Caliph Niyazkul-Beg developed a strong desire to build something like this fascinating building back in his kingdom. He summoned architects and astronomers and set two conditions for them to fulfill while they would be constructing the madrasah following his sketches: it was to be located on one of the Silk Roads so that the Turkmens who traveled along it stopped at the building; and the design was to show that all the parts of the world are as equal as all the people of the world are, since all live on the same earth, breathe the same air and enjoy the same sky. The Caliph Niyazkul-Beg’s desire was satisfied. Chor-Minor Madrasah was constructed on the Silk Road and its chartak or darvozakhona entrance block had four minarets symbolizing, besides the cardinal points, the Samanids, Shaybanids, Karakhanids and Manghits. Each of the minarets has a unique shape and decoration. Some people believe that the four different designs of them reflect the differences of the four world religions. Some of their elements, for example, are clear images of Buddhist prayer wheels or Christian crosses. Between the minarets there is large dome symbolizing the same sky and one God for all.

The first floor of this outstanding architectural monument had a hexagonal lobby. The second floor had a square guard room where passages inside the minarets ran from. The interior walls and the dome were decorated with inscriptions of religious maxims in Arabic. Some of them still survive. Added on to the sides of the building, there were student cells forming a rectangular courtyard. There was also a library with a lot of valuable manuscripts in it on the second floor.

Unfortunately, the madrasah in its entirety does not survive. Only part of the portal with a hall used as a mosque and the four minarets are still remaining. The dome over the hall allowed using it as zikrkhona prayer room where Sufis could hold their ritual ceremonies. 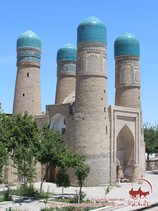 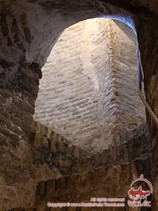 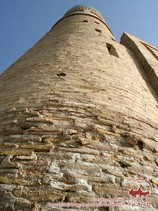 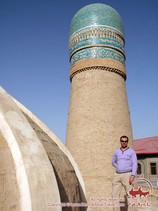 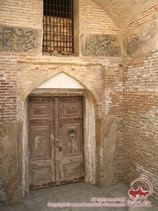 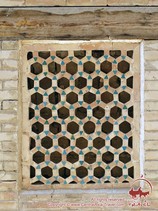 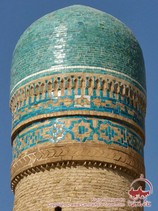