Southern town of Uzbekistan - Bаysun (also spelt Boysun, Bajsun or Baisun) - is located in two hours drive from the center of Surkhandarya region (Termez), towards Baysuntog mountains, in the branches of Hissar range. Having arrived to Baysun, one may feel as if he came to another world - isolated, where the sole of far centuries is still felt. And not only the historical monuments and sights make it such one, but also people, who live in Baysun, hold the customs and traditions of their ancestors sacred, sing ancient songs, and who are masters in handicrafts, which became the heritage of our country. 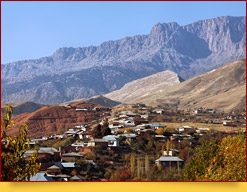 The live-style of Baysun residents is colorful. It may become a theme for spread and detailed investigations of ethnographers and historians. Houses of people here are decorated with self-sewed carpets-suzani, clothes and shoes - with intricate handmade embroidery. On the tables manually painted ceramic dishes stand in beauty.

Folklore traditions of the residents preserved almost in their original kind from ancient times and are still being passed from one generation to another. Every significant event in person’s life is accompanied by unique, specific only for this very place, colorful ritual. Wedding, child’s birth, funeral and calendar ceremonies devoted to Navruz holiday, tulips gathering, appealing to rain are accompanied by special singing of songs, dances, games, national bright dresses. And all of these are weekdays of Baysun residents.

In 2001, admitting the uniqueness of Surkhandarya oasis, UNESCO included Baysun region into the list of 19 cultural areas, which hold the title of “Masterpieces of the Oral and Intangible Heritage of Humanity”.

Not far from Baysun there located Surkhan nature reserve, famous not only for variety of flora and fauna, but also for petrified footprints of dinosaurs in the South-West of reserve, who inhabited this area hundreds of years ago. The rock paintings, dated back to the Mesolithic and Neolithic periods were found here as well. 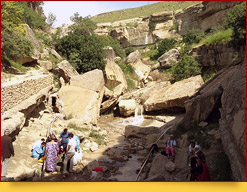 In the mountains of Baysutau there located famous Teshik-Tash cave, where in 1938 during the archeological excavations the ancient burial with remains of Neanderthal child was found. Animal bones, discovered near to it, symbolize that it was not just a burial place, but a real funeral ritual. Not far from Teshik-Tash grotto, there is another cave - Amir Temur cave. The excavations were not held here due to the nature peculiarities of this place - tali, which prevent scientists from reaching the monument. According to legends, the sabre of great commander is buried in grotto.

Baysuntau mountains keep a great deal of various legends. One of them says about Zarautsay gorge. Legends say, that a cave in this gorge, called “Zaraut-Kamar”, keeps treasures of famous traveler Marco Polo. He hid them from wild hands of robbers, who attacked his caravan on the Great Silk Road. Archeologists tried to find these treasures, but discovered only ancient petroglyphs in the cave, being significantly divergent by the time of their origination. The paintings of middle Paleolithic period and Bronze Age were found here.

There is a famous sacred spring “Omonkhona” in Baysun as well. It is almost always crowded here - very often people go pilgrimage to this place in order to drink medicinal water or have a healthy bath. Mineral water of the spring can help to cure diseases of kidneys and liver.