Spiсy flavors of the East

«The one that has a musk in his pocket does not scream about it on the streets.
The smell of musk speaks for him».
(Saadi).

Oh, oriental spices and the magnetic aroma of the East, how many you have seduced over the centuries! No chemical substitute, even very good, can ever become an analog of natural oriental spices. 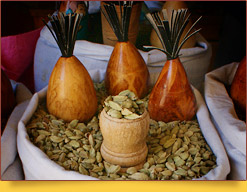 Uzbek cuisine is just unthinkable without spices. Some hundred years ago, these spices came here thanks to the trade caravans, which gradually furrowed the roads of the Great Silk Road, bringing fragrances from distant countries - China, India, etc. When transporting from city to city, the price for them increased, in the markets of Tashkent, Samarkand, Bukhara the cost of a handful of spices could be prohibitive, and not everyone could afford such a purchase. Therefore, until now you feel a certain mystery and privilege when buying oriental spices and herbs.

On the big city bazaars of Uzbekistan you will certainly find a spice merchant. He towers over his goods like a magician, holding a whole palette of colors before him. Small and large boxes of spices: zira (cumin), cardamom, turmeric, saffron, coriander, caraway, sesame, red and black bitter pepper, dried tomatoes and red sweet peppers (paprika), sweet peas, cloves, barberry, "universal"  seasonings (for example, seasonings for pilaf - a set of specially selected spices for the king of Uzbek cuisine) and much more.

All these spices packed in bright parcels can be bought in supermarkets with the only drawback - it can not be touched and sniffed. After all, even the process of buying spices in the bazaar is a whole art. 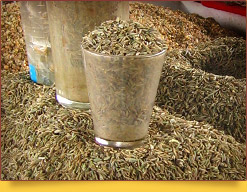 Natural spices are used not only in cooking, but also in folk and traditional medicine, cosmetology. For example, the root of licorice. Syrup from the licorice root works well for colds and strong coughs (as expectorant mixture). The licorice root was exported from the territory of the Turkestan region until the XIX century. Due to the sweet taste, rootstock serves an additive to various medicines, as well as in the preparation of some national Uzbek sweets (nishalda, halva, etc.).

So far, most of the eastern spices used in Uzbek cuisine and medicine grow in Uzbekistan and in the territories of neighboring Central Asia countries.

The quotation given in the beginning, speaks about east spices very correctly. For example, sellers of zira (zra, cumin) often walk through the bazaar with a large bowl full of this fragrant spice. If the quality is high its incomparable enchanting aroma spreads widely around the merchant himself, and the nose wants to find this "spice sorcerer" instantly and buy a handful of zira. The zira price can vary completely, depending on quality and variety. There are several types of zira: large and shallow, black and with a brown tinge. One should grind zira in a mortar to release all its flavor. Mostly zira is an additive to meat dishes - samsa, manti and, of course, pilaf. Pilaf is not pilaf without zira! When buying it, you need to rub a few pieces with your fingers in the palm of your hand and you will immediately feel a strong fragrance. If not, go to another seller boldly. Seeds should be whole and fragrant! Zira has a high-energy value: it contains water, proteins, fats, carbohydrates, calcium, iron, magnesium, sodium. As a rule, one dish requires a little zira. The whole secret of spices depends on their correct amount. 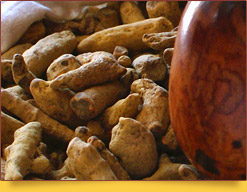 Turmeric is an aromatic flavoring and coloring spice, yellow-red powder from the roots of turmeric, which are rich in essential oils, minerals and vitamins. If you add a small pinch of turmeric (at the tip of the knife) to the dish, it will get a nicely sunny yellow shade. For example, if you want to separately boil pasta, potatoes or rice and add turmeric, then after cooking they will be appetizing-golden. The main thing is not to overdo it! Otherwise, the water will turn rusty red. Everything should be exact, as in a drugstore, only then the dish will acquire a delicate aroma of the East. Turmeric can also be used in the fried foods, as well as put in dough.

Another food color is saffron (the Arabic version of the name translates as "yellow"). Saffron has long been considered the king of plants in many Eastern countries, it was 15 times more expensive than black pepper! Saffron not only colors the dish in a pleasantly yellowish, but also gives it a unique aroma. It is an additive of hot dishes and confectionery. Moreover, since ancient times one used saffron not only as a seasoning and coloring agent, but also as a medicine and incense. However, saffron, as a rule, does not tolerate the neighborhood with other spices, even though you need a microscopic amount of it to give the optimum flavor to the dishes. 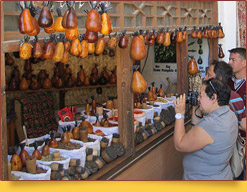 Uzbek cusine uses coriander (kashnich, kinza) both stems and leaves (herbs), seeds and roots. Cilantro has a very specific taste. One should put quite a bit so that it does not repel the taste of the dish itself. Coriander gives its famous delicious flavor to pilaf, it is also used for marinating meat for shish kebab and in other different marinades (marinated cucumbers, tomatoes). Seeds can be sold whole or chopped.

Barberry is a medicinal plant, whose berries add piquant sourness. Barbaris put in pilaf and other dishes of national Uzbek cuisine, as well as in jam, sauces, meat marinades, etc. Barberry has many varieties. In Uzbekistan, berries of barberry are sold dried (small, dark blue). Its root and bark are widely used in folk and traditional medicine.

Sesame seeds are additives for baking buns, samsa, flatbread, they make pastry even more appetizing. Sesame is extremely rich in calcium, so one even makes sesame milk by grinding the grains with a small amount of water. 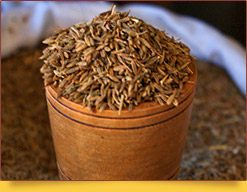 Caraway is an herb with a high content of essential oils and tannins. Seeds of caraway have a pleasant, strong flavor and used in medicine, perfumery, culinary. Black caraway also grows in Central Asia, its seeds have been used since ancient times to treat many diseases and strengthen immunity.

Oregano.  In Uzbekistan one grows the Middle Asiatic type of oregano - perennial herb. Due to its delicate and soothing aroma, this herb helps from insomnia, calms the nerves. Essential oils, which are contained in oregano, are used in the composition of painkillers. Oregano is bee plant - honey from mountain oregano has unique medicinal properties!

Agar-agar is a substance from red and brown algae. It has the same properties as gelatin, so one often adds it for making various jelly. Aga-agar has renowned medicinal properties, for example, it helps purify the intestinal tract, removes toxins, and strengthens the liver. 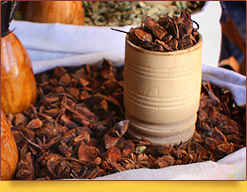 Anise (arpabodion) is a spicy plant, its light seeds are quite zira-like. Anise is an additive to pilaf, lagman and other meat dishes. It is also an ingredient of confectionery production. In folk medicine one apply both root and aboveground parts of anise. Anise can also serve as a component of tea – this drink has soothing properties, it helps well with migraines. An infusion of anise seeds is recommended to heal a strong cough. Central Asian anise is light, while the Iranian has an unusual form of an asterisk and in Uzbek they call it badon, bodiyon. The unusual form of this plant itself causes a desire to buy it sooner. True, anise is highly unsuitable for pregnant and those who have peptic ulcer

Thyme (chaber, Thymus serpyllum - bot. ) is a half-shrub with a strong specific flavor. Thyme brews and extracts are good in treating colds, bronchitis (as part of expectorant mixture) and many other diseases, also used to make compresses from radiculitis and neuritis. Thyme is used in perfumery and to make preservation.

When correctly used oriental spices give dishes not only an excellent taste, but also have great health benefits. It is believed that they improve mood and appetite, can cure many diseases and prolong life. The main thing is to use them moderately and to fight the wish to add more. You will go to Uzbekistan, be sure to visit the spices store and enjoy the charming aromas of the colorful East.