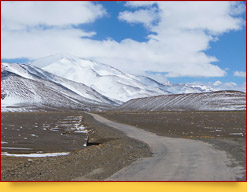 The famous Pamir Highway is an asphalt road running at high altitudes for 700 km to link Dushanbe with Khorog (Tajikistan) and Osh (Kyrgyzstan). The Pamir Highway also known officially as route M41 (M41 Road, M41 highway) largely follows the Tajik border with Afghanistan and China. This mountain road ranks as one of the world’s highest international asphalt roads. The highway is hugely important as part of the regional infrastructure, as this is the only artery linking the remote areas of the Pamir Mountains with the rest of the world.

The Pamir Highway is empty and unpredictable: it features beautiful scenery and several passes over 4,000 m above sea level, with very few garages and fuel stations all along the road.

The largest portion of the Pamir Highway lies in the territory of Tajikistan, and the Osh - Khorog section of the road is the most loaded in terms of transport. The sections in remote high-altitude areas and those branching from the main road usually have no surface and are not used in the winter time due to the threat of avalanches.

The three main mountain passes are located in the eastern section of the Pamir Highway: Taldyk (3,615 m), Kyzylart (4,280 m) and Ak-Baital (4,655 m). The highway also passes Murgab (Tajikistan), the highest village in Central Asia situated at an elevation of 3,600 m above sea level.

The most frequent visitors of the Pamirs are hikers and climbers, the latter coming here to ascend the famous 7,000-metre summits - those of Lenin Peak in Kyrgyzstan and Communism (Ismail Somoni) Peak in Tajikistan. Tajikistan’s Pamir Highway is famous route for the adventure bicycle tourists; its challenging terrain can be a true test of endurance. Also, there are many people, mostly from Europe and Russia, travelling the region in jeeps and on motorcycles.

The Pamir Highway travelers usually stay for the night in mountain villages, in guest houses owned by locals. In large towns there is an option to stay at a hotel.

The Pamirs and Pamiris 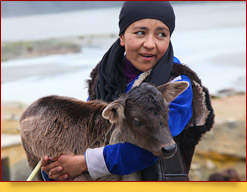 The alpine regions of the Pamir Mountains are scarcely populated and are characterised by severe weather conditions and infinitely picturesque landscapes. On your way you can see a number of very beautiful mountain lakes, hot mineral springs and geysers, ancient fortresses, herds of pasturing yaks, the traditional houses of the Pamiris and yurts of the local Kyrgyz.

The climate in the region is particularly harsh, with scarce rainfalls and extremely cold and windy winters, which together with high altitudes and infertile soil makes farming very difficult.

The Pamiris inhabit the historical area of Gorno-Badakhshan Autonomous Region (Western, Southern and Eastern Pamirs), speak the Pamir language and profess Ismailism - an unusual blend of traditional Shia Islam and ancient Aryan religions. Instead of mosques the Pamiris use special preying houses. In small villages that have no such places people gather each Friday in the house of one of the co-villagers and prey in turns. Priests in Ismailism are called Pirs - specially revered people with secular and religious education.

Mustsees on the Pamir Highway, places to visit and top sights: 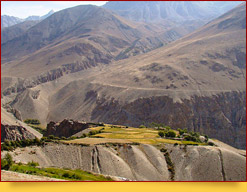 •  Khorog, the main city of the Gorno-Badakhshan Autonomous Region (GBAO). Khorog is a very beautiful city buried in thick verdure, with unique traditional Pamir houses in its suburbs and huge poplars growing all over the city area. A regional centre of administration, trade, transport and, certainly, education, Khorog is situated on the bottom of a deep gorge, at an elevation of 2,200 m above sea level.

•  Kalai-Khumb, an urban village situated close to the border with Afghanistan.

•  Garm Chashma hot springs. Situated at an elevation of 2,770 m, the springs have the form of natural baths decorated with fantastically beautiful white stalactites - carbonate deposits, which make one feel as if bathing in a small glacial lake.

•  Langar village in the Wakhan valley, South Pamirs. Langar is situated at an elevation of 3,000 m above sea level and surrounded on all sides by the peaks of the Pamir Mountains and Hindu Kush rising to 6,000 m and more. Langar is inhabited by Wakhan people and is famous for its rock paintings. 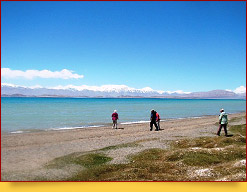 Murghab (3600 m), the highest town in Tajikistan and the whole Central Asia.

•  Lake Yashilkul (‘the green lake’), one of the most beautiful lakes of the South Pamirs situated t an elevation of 3,734 m above sea level.

•  High-altitude Karakul Lake (‘the black lake’, 3,914 m), the largest lake in Tajikistan and one of the highest in Central Asia, surrounded by mountain peaks. A wide strip of its shore lies on ice, it being found even on the bottom of the lake. Karakul Lake is 100 m higher than Lake Titicaca in the Andes, the most popular alpine lake in the world. The Karakul depression is the driest spot in the Pamirs.

•  The Alay Valley, one of the most picturesque parts of the Pamir-Alai, a tectonic depression between the Alay and Trans Alay Ranges situated in the south of Kyrgyzstan at elevations between 2,240 m and 3,536 m.

•  The village of Sary-Tash, situated in Alai District, Osh province, Kyrgyzstan, at an elevation of 3,150 m above sea level, at the junction of the principal Pamir roads.