The lessons of history or the ancient city of Otrar 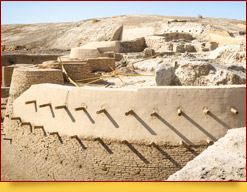 The image of Kazakhstan in ancient times is associated with the faces of stern nomads wandering on endless lands, with countless herds of horses grazing on the mountain slopes and yurts in the middle of the steppe.   However, there is a place in southern Kazakhstan that does not fit this image of nomadic life at all. This is the Oasis of Otrar, located in the lower course of the Arys River, where it flows into the Syr Darya.   In this region, people since time immemorial have been skilled farmers. They had developed a branched irrigation system that forever changed the landscape of this area, making it a point of attraction for many foreigners.

The centre of that ancient oasis was the city of Otrar (Farab). For centuries, the caravans of the Great Silk Road going from China to Europe had been crossing it.  Unfortunately only its settlement has survived to this day. Here, a 2,000-year history haunts you at every step.   With the siege of this city, Genghis Khan began his military campaign in Central Asia, and here in 1405 Tamerlane gasped his last breath. Otrar was the birthplace of great scientists: the mathematician and philosopher Al-Farabi, the astronomer Abbas Zhukhori, and the Central Asian Sufi saint Arystan Bab.

The heyday of the city occurred between the 1st and 13th centuries. At the beginning of the thirteenth century, it was part of the Khanat of Jiva and its population totalled two hundred thousand people. In those days, Otrar was in full swing.  Scientists wrote their treatises, musicians composed and goldsmiths created splendid and artful jewellery. Various workshops and all kinds of stores used to work here. The bazaar in the city centre was full of a large number of fabrics, carpets and other products brought from distant lands and created by local artisans.   The city mint produced its gold and silver coins, and classes were held in the madrasah.  In their free time, men used to meet friends and take a cap of wine in gurt khana.  And besides, everyone in the city enjoyed tasty fruits grown in the oasis gardens.

However, in 1219 an event occurred that changed the city destiny forever.  In that year, a caravan sent by Genghis Khan entered Otrar.  It should be noted that at that time, there was a peace treaty between the ruler of the Horde and the ruler of Khwarazm Al-Din Muhammed.  Inalchuq, the ruler of Otrar and a Muhammed’s relative, having taken the caravan members for reconnaissance troops, gave the "fatal" order to execute them. As a result, Genghis Khan Ambassadors were killed and the caravan was ransacked.  Enraged Genghis Khan sent thousands of troops to Otrar.  The proud city had not given up for six months. When the Mongols finally had managed to capture it, they annihilated all the inhabitants and burned the city to the ground.  Decades later, people began to settle there again, and by the end of the 15th century the city had been rebuilt. But its heyday had been left already behind. Having survived devastation in the 18th century, now from Dzungarians, it lost its relevance. At the beginning of the 19th century, people left the city forever. 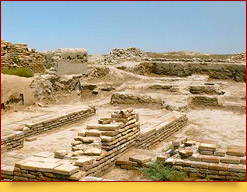 Without any doubt, history buffs will be curious to visit such an important place for Asian civilization. Only a few years ago, at the place of Otrar settlement site, there was only a mound. However, archaeologists from all over the world who have been working in the frame of UNESCO program, step by step, release ancient structures from soil. Nowadays, upon reaching Otrar, you are able to see the remains of the bathing complex and residential houses.  The columns of the main mosque and the foundations of the walls of the Berdibek Palace, where Amir Timur died, have come back to life out of nowhere. A part of the main bastion and the city wall, which still stores evidence of the siege of the city by Genghis Khan's troops, also appear in front of your eyes.  The spots of the boiling oil that the inhabitants of the besieged city poured over the enemy's heads remained here forever.  You need to see all this with your own eyes. It is better to see once than to read a hundred times ...