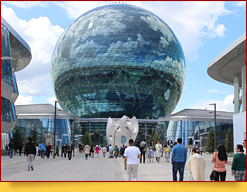 The Nur Alem Pavilion Sphere (The Shining World) is the largest spherical building in the world and one of the brightest places of interest of the capital of Kazakhstan. Nur Alem was built as the central pavilion of the world exhibition EXPO-2017 “Future Energy”. The concept of construction was based on the idea of "the last drop of oil before the era of green technologies". The project was developed by the American architectural bureau Adrian Smith + Gordon Gill Architecture, whose portfolio includes the Burj Khalifa in Dubai and the Kingdom Tower in Jeddah.

During the work of EXPO-2017, 91 countries held a presentation here, and the Nur Alem pavilion became the most visited at the exhibition. After sunset, the giant ball became the object of a grand laser show.

After the end of the exhibition, the sphere building became the first technological energy museum of the future in Kazakhstan, that not only talks about various types of energy, but also produces it. Photovoltaic panels are built into the walls, and silent wind generators work in the upper part of the Nur Alem sphere. 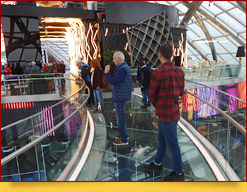 The diameter of the sphere is 80 m, the height is 100 m, the building has 8 floors, each of which reflects a specific concept. From the first to the eighth floor interactive compositions are presented, which are devoted to: space, Sun, wind, biomass, water and kinetic energy. The first and eighth floors tell about Kazakhstan and the future of Nur-Sultan (Astana), also on the eighth floor there is an observation deck. Here it can be seen how the city itself will be provided with electricity. According to the plan, up to 50% of electricity by 2050, it should receive at the expense of renewable energy sources.

It is noteworthy that all sites in Nur Alem are interactive. You can touch them, conduct experiments, and even visitors themselves can be part of a scientific experiment, as it occurs for example, in the hall of kinetic energy. In addition to permanent exhibitions, the museum hosts lectures, open lessons for schoolchildren and students, and even circus performances of the “Wheel of Energy”. The Nur Alem Museum is constantly updated with exhibits from the latest scientific developments. Guide-robots accompany the visitors on the floors.