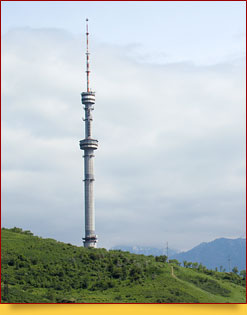 The Almaty Kok Tobe television tower is located at the south-east edge of the city, on the Kok Tobe Mountain which is the highest point of Almaty. The TV tower was built between 1975 and 1983; its height from the base to the top is 372 m, and the top rises to 1,452 m above sea level. The tower is the tallest structure in Almaty and ranks among the most earthquake-resistant buildings in the world (it can resist a magnitude of up to 10).

The best way to reach the top of the Kok Tobe Mountain (1,130 m) is to use the famous cable car which starts directly from the centre of Almaty. The Kok Tobe cable car’s lower terminal is located at the Palace of the Republic in Dostyk Avenue in Almaty. The upper terminal can be found within the renovated Kok Tobe Amusement Park. The length of the cable is 1,620 m, the travel time is 6 minutes.

The first cable car system connecting Almaty and Kok Tobe was constructed in 1967 and reconstructed in 2005. In 2016 a new modern cable car system with an innovative infrastructure was built. Currently, the cable cars are gondolas with eight comfortable seats and a panoramic view from their windows. The lift with a capacity of 750 people per hour is open all year round.

In the northern part of the Kok Tobe Mountain there is an observation deck providing a wonderful bird’s eye view of Almaty and its attractions and a view of picturesque Trans-Ili Alatau. The Kok Tobe Park features a nice zoo and exotarium, various amusements for people of all age and sex, including a Ferris wheel, the first monument to The Beatles in the territory of the former Soviet Union, as well as a wide range of cafes, restaurants and souvenir shops.

On the slope of the Kok Tobe Mountain there is also a bus station which you can use to get quickly to the city.