Do you know who Santa Claus is? 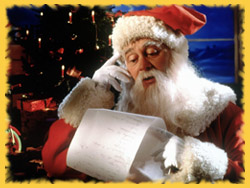 He is one of the most popular persons in the world. He is also known as Saint Nicholas, Father Christmas or simply Santa. He is historical and mythological character who we associate with bringing gifts on Christmas Eve. He was a Christian bishop of Myra in Lycia, now in Turkey born in very rich family. He was famous for generous gifts to the poor people and especially to the kids. Some legends say that he dropped the kids presents through the chimney. But he was much more capable then that. By the power of God he could bring dead people back to life, he could save sailor’s lives in storms. He did only good deeds. Nicholas died in December and probably this is the main reason to associate him as Santa Claus. This is the story how St Nicholas became popular as Santa Claus in Europe. Dutch sailors spread his story in USA. They called him “Sinte rklaas” and translated into English it is the famous Santa Clause.
The image of Santa Claus as a maker of children toy was elaborated by Thomas Nast. But when in 1930 Coca Cola used his image in their advertisement for first time they performed him as a round, big, joyous, red-cheeked old gentleman, famous all around the world as the person who brings gifts at Christmas-exactly like we know him today. He lives on the North Pole with his wife, reindeers and elves. They help him to determine wither the kids who wrote him were good or bad, to help him prepare millions of presents to fulfill their wishes. At Christmas Eve he wears his famous red suit, put all the toys in his sleigh and nine reindeer pull it. The red nose of Rudolph tells him the right direction.
Santa Claus is depicted as a good-hearted man with a round belly and snow-white beard. He hands out Christmas gifts to children on the night prior Christmas. Santa Claus is also widely popular as St. Nicholas. Santa Claus is credited to live at North Pole. Santa Claus can be always found in his traditional costume. His outfit is red in color embellished with white cotton. Some ideas to make Santa Claus costume.

• Use glue to position cotton balls on the red outfit of Santa. Put plenty of balls to get the look of white fur on the cuffs of the arms and the legs.
• On the bottom edge of the stocking cap place much white cotton tying a tassel ball of cotton at the tip of the cap.
• You are free to use stuff pillows to get Santa’s belly.
• The material of Santa’s attire may vary.
• You are at the liberty to use your own creativity and imagination.
• The closet of Santa should be full of toys

The history of Santa Claus runs about the past history of the world’s merriest man whose aim is handing gifts to kids on the Christmas Eve.
Santa Claus is a non-fictional hero; it is famous by such names as Saint Nicholas, Saint Nick, Father Christmas, Kris Kringle, Santy, or just Santa.
Americans call him Santa Claus. Long-long ago in Turkey there lived a bishop named Saint Nicholas. The bishop was very wealthy and generous. He had a shelter for poor kids and adored to make them happy. He handed out presents to poor children.
After his passing he was canonized as a saint. He was considered to be the patron of kids and seafarers. In Netherlands he got the name of Sinter Nikolass which was shortened to Sinter Klaas. When the Dutch people moved into America the name changed to “Santa Claus”.
Saint Nicholas followed the custom of remaining present in the shoes of good –behaving children. Whatever the history may be we keep in mind Santa Claus as a fat jovial person with a white beard who is considered to be the jolliest person throughout the world.