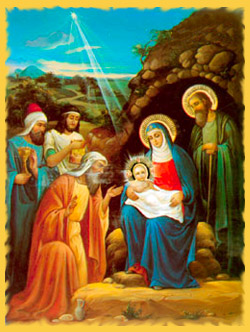 In the early 17th century, a wave of religious reform changed the way Christmas was celebrated in Europe. When Oliver Cromwell and his Puritan forces took over England in 1645, they vowed to rid England of decadence and, as part of their effort, cancelled Christmas. By popular demand, Charles II was restored to the throne and, with him, came the return of the popular holiday. The pilgrims, English separatists that came to America in 1620, were even more orthodox in their Puritan beliefs than Cromwell. As a result, Christmas was not a holiday in early America. From 1659 to 1681, the celebration of Christmas was actually outlawed in Boston. Anyone exhibiting the Christmas spirit was fined five shillings. By contrast, in the Jamestown settlement, Captain John Smith reported that Christmas was enjoyed by all and passed without incident.
After the American Revolution, English customs fell out of favor, including Christmas. In fact, Congress was in session on December 25, 1789, the first Christmas under America’s new constitution. Christmas wasn’t declared a federal holiday until June 26, 1870.

Washington Irving reinvents Christmas
It wasn’t until the 19th century that Americans began to embrace Christmas. Americans re-invented Christmas, and changed it from a raucous carnival holiday into a family-centered day of peace and nostalgia. But what about the 1800s peaked American interest in the holiday?

The early 19th century was a period of class conflict and turmoil. During this time, unemployment was high and gang rioting by the disenchanted classes often occurred during the Christmas season. In 1828, the New York city council instituted the city’s first police force in response to a Christmas riot. This catalyzed certain members of the upper classes to begin to change the way Christmas was celebrated in America. In 1819, best-selling author Washington Irving wrote The Sketchbook of Geoffrey Crayon, gent., a series of stories about the celebration of Christmas in an English manor house. The sketches feature a squire who invited the peasants into his home for the holiday. In contrast to the problems faced in American society, the two groups mingled effortlessly. In Irving’s mind, Christmas should be a peaceful, warm-hearted holiday bringing groups together across lines of wealth or social status.
Irving’s fictitious celebrants enjoyed “ancient customs,” including the crowning of a Lord of Misrule. Irving’s book, however, was not based on any holiday celebration he had attended—in fact, many historians say that Irving’s account actually “invented” tradition by implying that it described the true customs of the season.

Before the Civil War
The North and South were divided on the issue of Christmas, as well as on the question of slavery. Many Northerners saw sin in the celebration of Christmas; to these people the celebration of Thanksgiving was more appropriate. But in the South, Christmas was an important part of the social season. Not surprisingly, the first three states to make Christmas a legal holiday were in the South: Alabama in 1836, Louisiana and Arkansas in 1838.
In the years after the Civil War, Christmas traditions spread across the country. Children"s books played an important role in spreading the customs of celebrating Christmas, especially the tradition of trimmed trees and gifts delivered by Santa Claus. Sunday school classes encouraged the celebration of Christmas. Women"s magazines were also very important in suggesting ways to decorate for the holidays, as well as how to make these decorations.
By the last quarter of the nineteenth century, America eagerly decorated trees, caroled, baked, and shopped for the Christmas season. Since that time, materialism, media, advertising, and mass marketing has made Christmas what it is today. The traditions that we enjoy at Christmas today were invented by blending together customs from many different countries into what is considered by many to be our national holiday.

An overview:
1600"s: The Puritans made it illegal to mention St. Nicolas" name. People were not allowed to exchange gifts, light a candle, or sing Christmas carols.
17th century: Dutch immigrants brought with them the legend of Sinter Klaas.
1773: Santa first appeared in the media as St. A Claus.
1804: The New York Historical Society was founded with St. Nicolas as its patron saint. Its members engaged in the Dutch practice of gift-giving at Christmas.
1809: Washington Irving, writing under the pseudonym Diedrich Knickerbocker, included Saint Nicolas in his book "A History of New York." Nicolas is described as riding into town on a horse. 1812: Irving, revised his book to include Nicolas riding over the trees in a wagon.
1821: William Gilley printed a poem about "Santeclaus" who was dressed in fur and drove a sleigh drawn by a single reindeer.
1822: Dentist Clement Clarke Moore is believed by many to have written a poem "An Account of a Visit from Saint Nicolas," which became better known as "The Night before Christmas." Santa is portrayed as an elf with a miniature sleigh equipped with eight reindeer which are named in the poem as Blitzem, Comet, Cupid, Dancer, Dasher, Donder, Prancer, and Vixen. Others attribute the poem to a contemporary, Henry Livingston, Jr. Two have since been renamed Donner and Blitzen.
1841: J.W. Parkinson, a Philadelphia merchant, hired a man to dress up in a "Criscringle" outfit and climb the chimney of his store.
1863: Illustrator Thomas Nast created images of Santa for the Christmas editions of Harper"s Magazine. These continued through the 1890"s.
1860s: President Abraham Lincoln asked Nast to create a drawing of Santa with some Union soldiers. This image of Santa supporting the enemy had a demoralizing influence on the Confederate army -- an early example of psychological warfare.
1897: Francis P Church, Editor of the New York Sun, wrote an editorial in response to a letter from an eight year-old girl, Virginia O"Hanlon. She had written the paper asking whether there really was a Santa Claus. It has become known as the "Yes, Virginia, there is a Santa Claus" letter. 4
1920"s: The image of Santa had been standardized to portray a bearded, over-weight, jolly man dressed in a red suit with white trim. 5
1931: Haddon Sundblom, illustrator for The Coca-Cola ™ company drew a series of Santa images in their Christmas advertisements until 1964. The company holds the trademark for the Coca-Cola Santa design. Christmas ads including Santa continue to the present day.
1939 Copywriter Robert L. May of the Montgomery Ward Company created a poem about Rudolph, the ninth reindeer. May had been "often taunted as a child for being shy, small and slight." He created an ostracized reindeer with a shiny red nose who became a hero one foggy Christmas eve. Santa was part-way through deliveries when the visibility started to degenerate. Santa added Rudolph to his team of reindeer to help illuminate the path. A copy of the poem was given free to Montgomery Ward customers. 6
1949: Johnny Marks wrote the song "Rudolph the Red-Nosed Reindeer." Rudolph was relocated to the North Pole where he was initially rejected by the other reindeer who wouldn"t let him play in their reindeer games because of his strange looking nose. The song was recorded by Gene Autry and became his all-time best seller. Next to "White Christmas" it is the most popular song of all time.
1993: An urban folk tale began to circulate about a Japanese department store displaying a life-sized Santa Claus being crucified on a cross. It never happened.
1997: Artist Robert Cenedella drew a painting of a crucified Santa Claus. It was displayed in the window of the New York"s Art Students League and received intense criticism from some religious groups. His drawing was a protest. He attempted to show how Santa Claus had replaced Jesus Christ as the most important personality at Christmas time.