First ever attempt to climb up Muztagata Peak has been made in 1894 by Swen Anderson - Swedish explorer and a Member of the Russian Imperial Geographic Society. The courageous explorer has made 4 attempts to reach the summit. But his maximum achievement was reaching the altitude of 6300m - the deed at that time regarded nearly as heroic one.

Next endeavour was taken by the notorious English explorer Eric Shecklton who, at that time, was working as Consul General for Great Britain in Kashgar and had excellent resources for the exploration of the new unknown mountaineering area.

In 1947, along with his friend Tillman, Shecklton has reached the altitude of around 7000m. 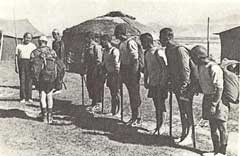 For the first time in the world history of mountaineering 30 men have simultaneously reached the summit. Apart of mountaineering tasks, the team members were also doing survey and other research work in the unexplored area.

The expedition members have also made a successful first ever ascent at the neighbouring Konghur Peak (7595m).
Lead by K.Kuzmin, six Soviet and 2 Chinese climber have reached the top.

In 2000, small American expedition lead by D.Mahzur has reached the top of Muztagata from the East.
Muztagh-Ata, or Muztag-ata, is the second highest of the mountains which form the northern edge of the Tibetan Plateau. It is sometimes regarded as being part of the Kunlun Shan, although physically it is more closely connected to the Pamir. It is also reputedly one of the easiest 7,000 m peaks in the world to climb, due to its gentle western slope and the comparatively drier weather of Xinjiang.

Muztagh Ata lies just south of Kongur Tagh, the highest peak of the Kunlun Shan. Together they form a somewhat isolated group, separated from the main chain of the Kunlun, and also separate from the Pamir Mountains to the west. (Both peaks are sometimes regarded as being in the "Chinese Pamir", and are more closely connected to the main Pamir group than the main Kunlun group.) Not far to the north and east of this group are the lowlands of the Tarim Basin and the Taklamakan Desert. The Karakoram Highway passes very close to both peaks.

Since the first ascent, many ascents of Muztagh Ata have been made. In 1980, a party led by Ned Gillette made a ski ascent/descent of the standard route, the first ski ascent of a mountain over 7,500 m (24,600 ft). An ascent of the much harder south-east ridge was made in 2000.